Major expansion of solar installations in China and Japan and record investments in offshore wind projects in Europe helped propel global 2014 investments to $270 billion, a 17% surge from the 2013 figure of $232 billion.

It was the first annual increase in dollars invested in and committed to renewables (excluding large hydro-electric projects) in three years, a total just 3% below the all-time record of $279 billion set in 2011. The falls in the investment figures for 2012 (to $256 billion) and 2013 (to $232 billion) were attributed in part to lower prices for renewable energy technologies due to economies of scale.

The 103Gw of generating capacity added around the world made 2014 the best year ever for newly installed capacity, according to the UNEP's 9th annual "Global Trends in Renewable Energy Investments" report, prepared by the Frankfurt School-UNEP Collaborating Centre, and Bloomberg New Energy Finance.

A continuing sharp decline in technology costs -particularly in solar but also in wind -means that every dollar invested in renewable energy bought significantly more generating capacity in 2014. The 103GW of capacity added by new renewable energy sources last year compares to 86GW in 2013, 89GW in 2012 and 81GW in 2011.

The 103GW of capacity added by renewables last year equals the energy generating capacity of all 158 nuclear power plant reactors in the USA.

Wind, solar, biomass and waste-to-power, geothermal, small hydro and marine power contributed an estimated 9.1% of world electricity generation in 2014, up from 8.5% in 2013. This meant that last year the world electricity system emitted 1.3 gigatonnes of CO2 -roughly twice the emissions of the world's airline industry -less than it would have if that 9.1% had been produced by the same fossil-dominated mix generating the other 90.9% of world power.

"Once again in 2014, renewables made up nearly half of the net power capacity added worldwide"says Achim Steiner, UN Under-Secretary-General and Executive Director of UNEP.

"These climate-friendly energy technologies are now an indispensable component of the global energy mix and their importance will only increase as markets mature, technology prices continue to fall and the need to rein in carbon emissions becomes ever more urgent."

"The growing penetration of renewable generation in the world's developing economies is one of the important and encouraging aspects of the 2014 report."

As in previous years, the market in 2014 was dominated by record investments in solar and wind, which accounted for 92% of overall investment in renewable power and fuels. Investment in solar jumped 25% to $149.6 billion, the second highest figure ever, while wind investment increased 11% to a record $99.5 billion. In 2014, some 49GW of wind capacity and 46GW of solar PV capacity were added worldwide, both records.

The dominant feature of the solar sector was unprecedented expansion in China and Asia. Between them, the two Asian giants invested $74.9 billion in solar in 2014, around half the world's total.

A boom in European offshore wind development resulted in seven $1 billion-plus projects reaching "final investment decision"stage in 2014. Among these, the $3.8 billion 600MW Gemini installation off the cost of the Netherlands was the largest non-hydro renewable energy plant to get the go-ahead anywhere in the world.

Offshore wind projects worth $18.6 billion were financed globally in 2014. This was 148% higher than the previous year and 45% higher than the next highest year, 2010. Most of this total -$16.2 billion -was in Europe with China accounting for the remaining $2.4 billion.

Other renewable energy sources did not perform so well by comparison. Biofuels fell 8% to $5.1 billion, biomass and waste-to-energy dropped 10% to $8.4 billion and small hydro was down 17% to $4.5 billion. Only geothermal bucked the trend with a 23% increase to $2.7 billion.

A salient feature of the 2014 result was the rapid expansion of renewables into new markets in developing countries, where investments jumped 36% to $131.3 billion. China with $83.3 billion, Brazil ($7.6 billion), India ($7.4 billion) and South Africa ($5.5 billion) were all in the top 10 investing countries, while more than $1 billion was invested in Indonesia, Chile, Mexico, Kenya and Turkey.

In contrast, the total renewables investment in developed economies rose only 3% to $138.9 billion. Even accounting for the booming offshore wind sector, investments in Europe hardly changed at $57.5 billion.

Although 2014 was a turnaround year for renewables after two years of shrinkage, multiple challenges remain in the form of policy uncertainty, structural issues in the electricity system -even in the very nature of wind and solar generation, with their dependence on breeze and sunlight.

Another challenge was, at first sight, the impact of the 50%-plus collapse in the oil price in the second half of last year. According to Udo Steffens, President of the Frankfurt School of Finance and Management, however, the oil price is only likely to dampen investor confidence in parts of the sector, such as solar in oil-exporting countries, and biofuels in most parts of the world.

"Oil and renewables do not directly compete for power investment dollars,"said Steffens. "Wind and solar sectors should be able to carry on flourishing, particularly if they continue to cut costs per MWh. Their long-term story is just more convincing."

Of greater concern is the erosion of investor confidence caused by increasing uncertainty surrounding government support policies for renewables.

"Europe was the first mover in clean energy, but it is still in a process of restructuring those early support mechanisms," notes Michael Liebreich, Chairman of the Advisory Board for Bloomberg New Energy Finance. "In the UK and Germany we are seeing a move away from feed-in tariffs and green certificates, towards reverse auctions and subsidy caps, aimed at capping the cost of the transition to consumers.

"Southern Europe is still almost a no-go area for investors because of retroactive policy changes, most recently those affecting solar farms in Italy. In the US there is uncertainty over the future of the Production Tax Credit for wind, but costs are now so low that the sector is more insulated than in the past. Meanwhile the rooftop solar sector is becoming unstoppable."

Governments have often struggled to produce policy measures that keep up with the advance of renewable power and its knock-on effect on the rest of the electricity system. ing

2014 was a year of eye-catching steps forward for renewable energy with investment rallying strongly. If these positive investment trends are to continue it is increasingly clear that major electricity market reforms will be needed of the sort that Germany is now attempting with its Energiewendeenergy transition. The structural challenges needing to be overcome are not simple ones, but are of the sort that have only arisen because of the very success of renewables and their over two trillion dollars of investment mobilized since 2004.

Over $2 trillion invested in renewables since 2004

The report in full is publicly available from March 31 at http://fs-unep-centre.org

This release is available also in Chinese, French, German and Spanish at http://bit.ly/1HXootI 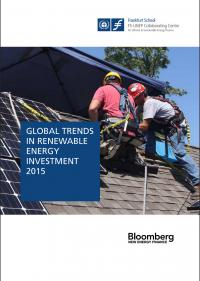 Cover of the New UNEP Report 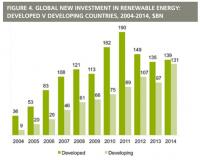