The fact that glaciers in the Himalayan mountains are thinning is not disputed. However, few researchers have attempted to rigorously examine and quantify the causes. Lawrence Berkeley National Laboratory scientist Surabi Menon set out to isolate the impacts of the most commonly blamed culprit—greenhouse gases, such as carbon dioxide—from other particles in the air that may be causing the melting. Menon and her collaborators found that airborne black carbon aerosols, or soot, from India is a major contributor to the decline in snow and ice cover on the glaciers.

"Our simulations showed greenhouse gases alone are not nearly enough to be responsible for the snow melt," says Menon, a physicist and staff scientist in Berkeley Lab's Environmental Energy Technologies Division. "Most of the change in snow and ice cover—about 90 percent—is from aerosols. Black carbon alone contributes at least 30 percent of this sum."

Menon and her collaborators used two sets of aerosol inventories by Indian researchers to run their simulations; their results were published online in the journal Atmospheric Chemistry and Physics.

The actual contribution of black carbon, emitted largely as a result of burning fossil fuels and biomass, may be even higher than 30 percent because the inventories report less black carbon than what has been measured by observations at several stations in India. (However, these observations are too incomplete to be used in climate models.) "We may be underestimating the amount of black carbon by as much as a factor of four," she says.

The Himalayan glaciers are often referred to as the third polar ice cap because of the large amount of ice mass they hold. The glacial melt feeds rivers in China and throughout the Indian subcontinent and provide fresh water to more than one billion people.

Atmospheric aerosols are tiny particles containing nitrates, sulfates, carbon and other matter, and can influence the climate. Unlike other aerosols, black carbon absorbs sunlight, similar to greenhouse gases. But unlike greenhouse gases, black carbon does not heat up the surface; it warms only the atmosphere.

This warming is one of two ways in which black carbon melts snow and ice. The second effect results from the deposition of the black carbon on a white surface, which produces an albedo effect that accelerates melting. Put another way, dirty snow absorbs far more sunlight—and gets warmer faster—than pure white snow.

Previous studies have shown that black carbon can have a powerful effect on local atmospheric temperature. "Black carbon can be very strong," Menon says. "A small amount of black carbon tends to be more potent than the same mass of sulfate or other aerosols."

Black carbon, which is caused by incomplete combustion, is especially prevalent in India and China; satellite images clearly show that its levels there have climbed dramatically in the last few decades. The main reason for the increase is the accelerated economic activity in India and China over the last 20 years; top sources of black carbon include shipping, vehicle emissions, coal burning and inefficient stoves. According to Menon's data, black carbon emitted in India increased by 46 percent from 1990 to 2000 and by another 51 percent from 2000 to 2010.

However, black carbon's effect on snow is not linear. Menon's simulations show that snow and ice cover over the Himalayas declined an average of about one percent from 1990 to 2000 due to aerosols that originated from India. Her study did not include particles that may have originated from China, also known to be a large source of black carbon. (See "Black soot and the survival of the Tibetan glaciers," by James Hansen, et al., published last year in the Proceedings of the National Academy of Sciences.) Also the figure is an average for the entire region, which saw increases and decreases in snow cover. As seen in the figure, while a large swath of the Himalayas saw snow cover decrease by at least 16 percent over this period, as reported by the National Snow and Ice Data Center, a few smaller patches saw increases.

Menon's study also found that black carbon affects precipitation and is a major factor in triggering extreme weather in eastern India and Bangladesh, where cyclones, hurricanes and flooding are common. It also contributes to the decrease in rainfall over central India. Because black carbon heats the atmosphere, it changes the local heating profile, which increases convection, one of the primary causes of precipitation. While this results in more intense rainfall in some regions, it leads to less in other regions. The pattern is very similar to a study Menon led in 2002, which found that black carbon led to droughts in northern China and extreme floods in southern China.

Black carbon a significant factor in melting of Himalayan glaciers 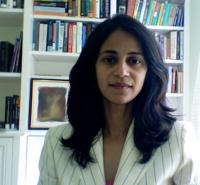