What effects do global warming and the formation of fine particles have on each other? Since the entire atmosphere cannot be heated for experimental purposes, a part of it is put in a chamber and investigated there. Now, a standard procedure has been drawn up for analysing fine particles in experimental chambers.

To better understand the mechanisms associated with fine particle formation, atmospheric events can be experimentally studied in relatively large containers known as experimental chambers. In these chambers, atmospheric conditions, such as temperature, pressure, humidity, gases and particles are altered in a controlled manner.

Now, the conditions of the experimental chamber and methods used have been standardised in a research project headed by the Institute for Atmospheric and Earth System Research (INAR) of the University of Helsinki. From now on, dozens of research groups conducting chamber measurements will adhere to the protocol established in the study published in the distinguished Nature Protocols journal.

What happens when the temperature of the Earth rises? What happens to clouds, their reflectance, and the formation of fine particles?

Fine particles in the atmosphere have an essential impact on global warming. For example, there are no clouds without particles: clouds need a seed from which they are formed, a core around which humidity starts to condense. Additionally, cloud colour and reflectance depend on the fine particles contained in the cloud.

Simulating the past and future

Chamber measurements can simulate not only future conditions but also those that prevailed centuries or millennia ago on Earth. For example, they can be used to simulate the state of the air and clouds in the preindustrial period or before the human era.

Studying the formation and effect of nanoparticles helps us better understand vast global phenomena impacting the lives of us all, such as climate change. 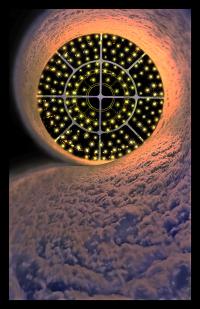 Artistic Version of the inside of the CLOUD