A characteristic feature of most animals is their ability to move quickly with the help of their musculature. Animals that can move are able to flee, hunt for prey, travel long distances or conquer new habitats. The evolution of muscles was thus a fundamental step during animal evolution. While the structure and function of muscles, especially of vertebrates, have been intensively studied, the evolutionary origin of smooth and striated muscles has so far been enigmatic. Comparative genome and gene expression studies, performed by researchers Patrick Steinmetz, Johanna Kraus and Ulrich Technau in an international collaboration with researchers from Germany, France and Australia, revealed the origin muscle components in ancestral animals such as sea anemones, jellyfish or sponges.

Phylogenetic comparisons showed that one of the crucial structural proteins of striated muscles of vertebrates, a "myosin" motor protein, originated by gene duplication. "As this specific myosin has so far only been found in muscle cells, we expected that its origin coincided with the evolution of muscle cells. We were very surprised to see that the 'muscle myosin' evolved probably in unicellular organisms, long before the first animals lived", explains Ulrich Technau who led the study.

"In sponges, that all lack muscles, the 'muscle myosin' appears to play a role in regulating the water flow", comments Gert Wörheide (Ludwig-Maximilians-Universität Munich), whose team was investigating muscle proteins in sponges together with Michael Nickel (University of Jena) and Bernard Degnan (University of Queensland).

Jellyfish occupy a special phylogenetic position to understand the evolution of muscles. They are cnidarians, an animal group that originated more than 600 million years ago, and possess striated muscles. Due to the striking similarities between striated muscles of vertebrates and jellyfish, it was so far assumed both striated muscle types share a common origin. In fact, jellyfish striated muscles also express the ancient "muscle myosin", but they lack several essential components that are characteristic for the structure and function of striated muscles of "higher animals".

Searching for the origin of muscles 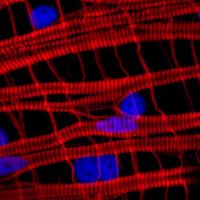