The world produces more corn by weight than any other cereal crop. Corn, also known as maize, is a staple food in many countries. But farmers growing corn face many challenges, such as drought, diseases, and pests.

For example, in sub-Saharan Africa, 20 to 80% of corn yields may be lost because of a semi-parasitic plant, Striga. In areas infested with Striga, farmers may even lose their entire crops.

The combination of Striga tolerance and improved nutrition is key. Farmers, as well as local populations, will benefit, says Peter Setimela, a study co-author. Setimela is a scientist at the International Maize and Wheat Improvement Centre in Harare, Zimbabwe.

Striga infestations can force small farmers in sub-Saharan and southern Africa to abandon their farms. "Striga is known to affect fields that have poor soil fertility. Its seeds can stay in the soil for more than 15 years," says Setimela. "Many small farmers can't afford to buy chemicals to control Striga. They may also be unable to buy chemical fertilizers."

Having access to varieties of corn that can tolerate Striga will benefit these farmers. They will be able to continue farming and growing corn in areas with Striga.

The improved nutritional content of these corn varieties will also help. The varieties have a wider variety of amino acids, the building blocks of protein.

Many rural populations depend on corn as a staple food. "But these populations often have limited access to protein sources, such as eggs, meat, and dairy products," says Setimela. "If varieties of corn can provide high-quality protein, these populations will benefit."

Setimela and colleagues tested both typical and high-protein varieties of corn for Striga resistance in the lab and field.

Controlled conditions, such as those in the laboratory, allow researchers to conduct tests that may not be possible in the field. But "ultimately, crops will be grown in farmers' fields," says Setimela. "We ensured that the results from controlled environments also apply to field conditions."

"These varieties will provide options to farmers in areas with Striga," says Setimela. "They will improve food security and nutrition." 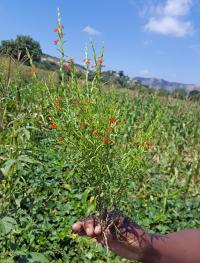