BLOOMINGTON, Ind. -- As carbon dioxide levels have risen during the last 150 years, the density of pores that allow plants to breathe has dwindled by 34 percent, restricting the amount of water vapor the plants release to the atmosphere, report scientists from Indiana University Bloomington and Utrecht University in the Netherlands in an upcoming issue of the Proceedings of the National Academy of Sciences (now online).

In a separate paper, also to be published by PNAS, many of the same scientists describe a model they devised that predicts doubling today's carbon dioxide levels will dramatically reduce the amount of water released by plants.

The scientists gathered their data from a diversity of plant species in Florida, including living individuals as well as samples extracted from herbarium collections and peat formations 100 to 150 years old.

"The increase in carbon dioxide by about 100 parts per million has had a profound effect on the number of stomata and, to a lesser extent, the size of the stomata," said Research Scientist in Biology and Professor Emeritus in Geology David Dilcher, the two papers' sole American coauthor. "Our analysis of that structural change shows there's been a huge reduction in the release of water to the atmosphere."

Most plants use a pore-like structure called stomata (singular: stoma) on the undersides of leaves to absorb carbon dioxide from the air. The carbon dioxide is used to build sugars, which can be used by the plant as energy or for incorporation into the plants' fibrous cell walls. Stomata also allow plants to "transpire" water, or release water to the atmosphere. Transpiration helps drive the absorption of water at the roots, and also cools the plants in the same way sweating cools mammals.

If there are fewer stomata, or the stomata are closed more of the day, gas exchange will be limited -- transpiration included.

"The carbon cycle is important, but so is the water cycle," Dilcher said. "If transpiration decreases, there may be more moisture in the ground at first, but if there's less rainfall that may mean there's less moisture in ground eventually. This is part of the hyrdrogeologic cycle. Land plants are a crucially important part of it."

Dilcher also said less transpiration may mean the shade of an old oak tree may not be as cool of a respite as it used to be.

"When plants transpire they cool," he said. "So the air around the plants that are transpirating less could be a bit warmer than they have been. But the hydrogeologic cycle is complex. It's hard to predict how changing one thing will affect other aspects. We would have to see how these things play out."

While it is well known that long-lived plants can adjust their number of stomata each season depending on growing conditions, little is known about the long-term structural changes in stomata number or size over periods of decades or centuries.

"Our first paper shows connection between temperature, transpiration, and stomata density," Dilcher said. "The second paper really is about applying what we know to the future."

That model suggests that a doubling of today's carbon dioxide levels -- from 390 parts per million to 800 ppm -- will halve the amount of water lost to the air, concluding in the second paper that "plant adaptation to rising CO2 is currently altering the hydrological cycle and climate and will continue to do so throughout this century."

Dilcher and his Dutch colleagues say that a drier atmosphere could mean less rainfall and therefore less movement of water through Florida's watersheds.

The Florida Everglades depend heavily on the slow, steady flow of groundwater from upstate. The siphoning of that water to development has raised questions about the future of the Everglades as a national resource.

"Climate forcing due to optimization of maximal leaf conductance in subtropical vegetation under rising CO2" Proceedings of the National Academy of Sciences (online), vol./iss. TBD 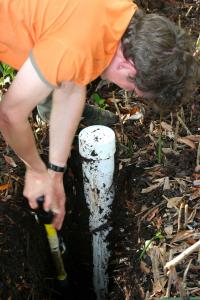