A young woman has become the first in the world to give birth to a healthy child after doctors restored her fertility by transplanting ovarian tissue that had been removed and frozen while she was a child.

A report of the case is published today in Human Reproduction [1], one of the world's leading reproductive medicine journals. While there have been reports of successful pregnancies after ovarian transplantation using tissue that had been removed from patients when they were adults, there have been none using tissue taken from girls before puberty and the ability of such immature ovarian tissue to develop to produce mature eggs is unclear.

The patient, who was born in the Republic of Congo, was diagnosed with sickle-cell anaemia when she was five. After emigrating to Belgium at the age of 11, doctors decided that her disease was so severe that she should be treated with a bone marrow transplant, and her brother was able to provide the matching tissue. The procedure requires that the patient's immune system should be disabled before transplantation to prevent rejection of the bone marrow and this is usually done using chemotherapy or radiotherapy, which can destroy the functioning of the ovaries permanently.

Therefore, before treating her with chemotherapy, the Belgian doctors removed the patient's right ovary when she was 13 years and 11 months old and froze tissue fragments. She had not started her periods, although there were signs that she had started puberty with breast development when she was 10.

The bone marrow transplant was successful, although the patient developed graft-versus-host disease and had to continue with immuno-suppressive drugs for 18 months after the transplant. Her remaining ovary failed and when she was 15, doctors gave her hormone replacement therapy to induce the onset of menstruation.

Ten years later the patient received counselling after expressing a desire to become pregnant. In order to restore her fertility, doctors led by Dr Isabelle Demeestere, a gynaecologist and research associate in the Fertility Clinic and Research Laboratory on Human Reproduction at Erasme Hospital, Université Libre de Bruxelles (Brussels, Belgium), stopped the hormone replacement therapy, thawed some, but not all, of the frozen ovarian tissue and grafted four fragments on to the remaining left ovary, and 11 other fragments at other sites in the body.

The transplanted tissue started to respond to her hormones and successfully started growing follicles that contain the maturing eggs. The patient started menstruating five months later and continued having regular menstrual cycles thereafter. Due to the infertility of her partner, she tried assisted reproduction but stopped when the relationship failed. More than two years after the transplantation she became pregnant naturally with a new partner at the age of 27 and delivered a healthy boy in November 2014, weighing 3140 grams (6.9 pounds).

Dr Demeestere said: "This is an important breakthrough in the field because children are the patients who are most likely to benefit from the procedure in the future. When they are diagnosed with diseases that require treatment that can destroy ovarian function, freezing ovarian tissue is the only available option for preserving their fertility.

"However, the success of this procedure requires further investigation in very young, pre-pubertal girls, as our patient had already started puberty even although she had not started menstruating. In addition, the procedure also raises some controversial issues. For instance, because it is an invasive procedure and because the lifespan of the graft is limited, should it be used to induce puberty and menstruation, rather than to restore fertility, when hormone replacement therapy is an efficient, standard, and non-invasive alternative for inducing puberty? Should the procedure only be proposed for patients with a high risk of ovarian failure or for those at low risk as well? We think, at present, that cryopreserved ovarian tissue should be used only for fertility restoration in patients at high risk of ovarian failure, and not for puberty induction or for restoring menstrual cycles in adults."

The patient's ovary continues to function normally and her doctors say there is no reason why she could not have more babies if she wants to. "She also has the possibility of undergoing a second transplantation with the remaining frozen tissue if the graft stops working, as we didn't transplant all the ovarian tissue the first time. We have another patient who became pregnant after ovarian transplantation, and she had two babies born after two graft procedures," said Dr Demeestere. 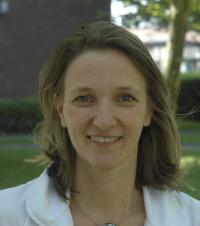 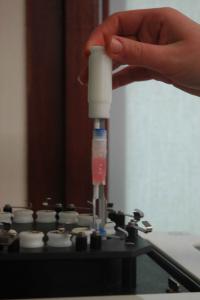 Ovarian Tissue Being Inserted into a Tube for Freezing and Storage