An international research team led by Nanyang Technological University, Singapore (NTU Singapore) have proposed that swarms of flies can be used to help monitor disease outbreaks. This follows their research that shows how whole communities of bacteria - known as a microbiome - can "hitch a ride" on common carrion flies and can be transferred to any surface where the flies land.

Their research is published in Scientific Reports today by a global team led by NTU geneticist, Professor Stephan Schuster.

By sequencing the genetic material of 116 houseflies and blowflies along with all the microorganisms that they are carrying, the team found that each of these flies carried up to several hundred different species of bacteria, some of which may be harmful to humans.

One of these, Helicobacter pylori, is a pathogen that can cause stomach ulcers in humans and is the strongest known risk factor for gastric cancer. Although known to be spread via body fluid and smear infections, this is the first time that H. pylori has been shown to be spread via flies in the environment.

"Our study has shown that bacteria can 'fly' by hitching a ride on common flies," said Prof Schuster, a research director at the Singapore Centre for Life Sciences Engineering (SCELSE) at NTU Singapore. "They pick up the microbiome on their feet, spread them across their wings in a similar way like how we might comb our hair, and then proceed to disperse them on surfaces that they land on."

Dr Ana Carolina Martins Junqueira, a molecular entomologist who co-led the research, said flies are an important part of nature's eco-system, as they are also pollinators like bees.

"Carrion flies have microscopic hairs on every part of the body excluding the eye and these bristles make them the perfect carrier for pollen and also bacteria. It is an evolutionarily optimised vehicle for the dispersal of microorganisms in the environment," said Dr Junqueira, a faculty member at the Federal University of Rio de Janeiro.

The team believes that their new technique could put flies into service in public health surveillance programs.

They suggest that germ-free flies, bred without any microorganisms in their microbiome, could pick up latent microbiomes in any environment they are released into since they are small enough to enter even the smallest of cracks and crevices.

When the flies are recaptured using bait traps, their microbiomes can be sequenced, giving clues to the type of bacteria they have encountered in the environment, thus acting as an early warning system.

"Such 'autonomous bionic drones' could be particularly useful in agriculture, if we want to detect a plant pathogen outbreak," said Prof Schuster. "Through regular monitoring, if we know that a particular pathogen is affecting the crops and is becoming an outbreak, then farmers could organise a targeted treatment that only eradicates that pathogen, leaving the other parts of the ecosystem intact."

"To date, diseases transmitted by a mechanical vector like flies have been a major overlooked pathway by both the medical and academic community. This is a great example of how observations from basic research on how diseases spread might be translated into viable and useful applications, opening up new avenues for future technology."

The research findings were made possible thanks to a new way to collect flies without contaminating them with additional microorganisms, and then sequencing every single part of a fly's body from its head and thorax to its legs and wings.

First, the flies are baited by a piece of rotting fish, followed by the researchers holding a container with dry ice close to the flies. The cold vapour from the dry ice sedates the fly and it falls into the cold container untouched and uncontaminated.

After the fly is defrosted in a sterile environment, the various parts are separated, crushed and then put into a gene sequencing machine. The resulting data is then sorted out by a supercomputer.

After filtering the genetic data from the fly's own chromosomes, mitochondria and symbiotic bacteria, what is left is the microbiome that can be matched to a database of all known bacteria DNA and RNA.

Flies in the study were collected from four different continents around the world: Australia, Brazil, the United States and Singapore.

This new procedure was inspired by a research trip to Australia, where Prof Schuster and Dr Junqueira were discussing their research with NTU's Visiting Professor and Nobel Laureate Barry Marshall, who was awarded the Nobel Prize in Physiology or Medicine in 2005 for the discovery of Helicobacter pylori.

"There were quite a lot of flies landing on our sweaters at Prof Marshall's farm and it was really easy just putting small containers with dry ice to capture them. They were literally dropping like flies," said Prof Schuster. 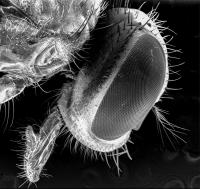 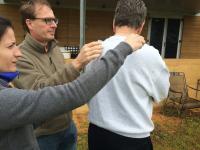