A 42-year-old investment banker arrives at the emergency department with complaints of nausea, vomiting, anxiety and tremor. He drinks alcohol every day—often at business lunches, and at home every evening. Worried about his health, he decided to quit drinking and had his last Scotch 24 hours before coming to emergency.

Withdrawal is a potentially fatal condition that is easily treated with benzodiazepine drugs, a class of sedatives used to treat alcohol withdrawal, anxiety, seizures, insomnia and more. But physicians are often reluctant to prescribe them because they're frequently abused and can be dangerous when mixed with other drugs, especially alcohol and opiates.

The most commonly used clinical sign of withdrawal is tremor, especially in the hands and arms. Judging tremor severity is harder than it sounds—it requires considerable medical expertise, and even experienced doctors' estimates can vary widely. Chronic alcohol abusers often come to the emergency department claiming to be in withdrawal in an effort to obtain benzodiazepines, and it can be difficult for inexperienced clinicians to determine if the patient is actually in withdrawal or "faking" a withdrawal tremor. Front-line healthcare workers had no objective way to tell the sufferers from the fakers—until now.

Narges Norouzi and Professors Bjug Borgundvaag of the Faculty of Medicine and Parham Aarabi of The Edward S. Rogers Sr. Department of Electrical & Computer Engineering at the University of Toronto developed the world's first app to measure tremor strength, providing objective guidance to direct treatment decisions. The app also shows promise in making solid predictions about whether the tremor is real or fake.

The team of researchers at Toronto's Schwartz/Reisman Emergency Medicine Institute at Mount Sinai Hospital, St. Michael's Hospital and Women's College Hospital and tested their app on 49 patients experiencing tremors in the emergency room, and 12 nurses trying to mimic the symptom.

Their study shows that three-quarters of patients with genuine symptoms had tremors with an average peak frequency higher than seven cycles per second. Only 17 per cent of nurses trying to "fake" a withdrawal tremor were able to produce a tremor with the same characteristics, suggesting that this may be reasonable cut-off for discriminating real from fake. The app uses data from an iPod's built-in accelerometer to measure the frequency of tremor for both hands for 20 seconds.

In the emergency room, clinicians filmed their patients' hand tremor while using the app and showed the footage to doctors afterward. Norouzi found that her app's ability to assess tremor strength matched that of junior physicians, while more senior doctors were able to judge symptoms with better accuracy. Norouzi's next move is to continue honing the tool and comparing its performance to doctors' subjective assessments, and to further study the effects of left- or right-handedness.

"There's so much work to do in this field," said Norouzi. "There is other work out there on Parkinson's tremors, but much less on tremors from alcohol withdrawal."

"The exciting thing about our app is that the implications are global," said Professor Borgundvaag, who is also an emergency physician at the Schwartz/Reisman Emergency Centre at Mount Sinai Hospital. "Alcohol-related illness is commonly encountered not only in the emergency room, but also elsewhere in the hospital, and this gives clinicians a much easier way to assess patients using real data."

"Our app may also be useful in assisting withdrawal management staff, who typically have no clinical training, and determining which patients should be transferred to the emergency department for medical treatment or assessment. We think our app has great potential to improve treatment for these patients overall."

"We have just begun to scratch the surface of what is possible by applying signal processing and machine learning to body connected sensors," said Professor Aarabi. "As sensors improve and algorithms become smarter, there's a good chance that we may be able to solve more medical problems and make medical diagnosis more efficient."

Norouzi and the team will present this work on Aug. 29, 2014 at the International Conference of the IEEE Engineering in Medicine and Biology Society in Chicago. 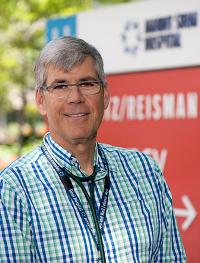 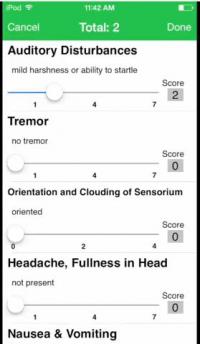