When environmental physicist Kira Rehfeld, from Heidelberg University, visited Antarctica for her research, she was struck by the intense light there. "It's always light in summer. This solar radiation could actually be used to supply the research infrastructure with energy", she observes. However, generators, engines, and heaters in these remote regions have mostly been powered until now by fossil fuels delivered by ship, such as petroleum or petrol, which cause global warming. Besides the high associated economic costs, pollution from even the smallest spills is also a major problem threatening the especially sensitive ecosystem.

Fossil fuels could be replaced by hydrogen, though, a versatile energy medium that in addition is able to be stored extremely well at low temperatures. "Our idea was therefore to use solar modules to produce climate-neutral hydrogen on site during the Antarctic summer by splitting water into hydrogen and oxygen through electrolysis", says May, then a postdoc at the Helmholtz-Zentrum Berlin Institute for Solar Fuels. Rehfeld and May applied for funding from the Volkswagen Foundation to investigate whether hydrogen can be generated using sunlight even at sub-zero temperatures, and which method is best suited for this. Low temperatures can considerably reduce the efficiency of electrolysis, though cold actually increases the efficiency of most solar modules.

May and his HZB colleague, Moritz Kölbach, have now empirically compared two different approaches: a conventional setup in which the photovoltaic module is thermally and physically separated from the electrolysis tank, and a newer, thermally coupled setup in which the photovoltaic module is in close contact with the wall of the electrolysis tank, promoting thermal diffusion. To simulate Antarctic conditions, Kölbach obtained a freezer, cut a hole in the door, installed a quartz window, and illuminated the inside of the cabinet with simulated sunlight. He filled the electrolysis container with 30 per cent sulphuric acid (also known as battery acid) that has a freezing point around -35 degrees Celsius and conducts electricity well.

Kölbach then set up the experimental cells, and carried out the series of measurements. During operation, it became apparent that the cell with the thermally coupled PV modules produced comparatively more hydrogen, since the illuminated PV modules pass their waste heat directly to the electrolyser. "We were even able to increase the efficiency by adding additional thermal insulation to the electrolyser. As a result, the electrolyte temperature climbed during illumination from -20 to as high as +13.5 degrees Celsius", says Kölbach.

The results of this study confirm that thermally coupled systems have potentially higher efficiency than thermally decoupled ones. Whether these advantages can be exploited economically, however, remains to be seen. "Therefore, in the next phase we want to test prototypes under realistic conditions. That will certainly be exciting and we are currently looking for partners for this", says May.

Locally generated solar hydrogen could be an option for replacing fossil fuels and eliminating the associated pollution danger to the environment and CO2 emissions, not only at the South Pole, but also in other extremely cold and sparsely populated regions of the world. This could include the high Alps, Canada and Alaska, the Andes, and other mountainous regions like the Himalayas.

"Perhaps solar-generated hydrogen will be economically viable initially in these kinds of remote regions of the world", says May, recalling the triumphant advance of photovoltaics, which first began supplying power to satellites in space about 60 years ago.

The study was supported by the Volkswagen Foundation under their "Experiment!" funding initiative ("Solar Hydrogen for Antarctica: Water Splitting under Extreme Conditions"). 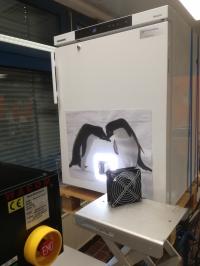 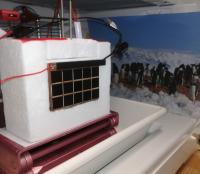