The Tropical Rainfall Measuring Mission or TRMM satellite again flew over severe thunderstorms that were spawning tornadoes over the eastern United States on April 28 and detected massive thunderstorms and very heavy rainfall.

TRMM, a satellite managed by both NASA and the Japanese Space Agency, captured the rainfall rates occurring in the line of thunderstorms associated with a powerful cold front moving through the eastern U.S. on April 28. TRMM flew over the strong cold front and captured data at 0652 UTC (2:52 AM EDT) on April 28, 2011. Most of the rainfall was occurring at moderate rates however, there were pockets of very heavy rainfall in Virginia, North Carolina, South Carolina, Georgia and Alabama where rain was falling at a rate of 2 inches (50 millimeters) per hour.

Tornadoes associated with this extremely unstable weather caused the deaths of at least 128 people in Alabama and 15 in Georgia.

TRMM data was also used to generate a 3-D look at the storm. TRMM's Precipitation Radar (PR) data was used by Hal Pierce of SSAI at NASA's Goddard Space Flight Center in Greenbelt, Md. to create a 3-D structure of those storms. The image Pierce created is a TRMM radar vertical cross section that shows some of these violent storms reached to incredible heights of almost 17 km (~10.6 miles). 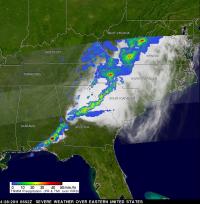