School-based dementia education could deliver much needed empathy and understanding for older generations as new research from the University of South Australia shows it can significantly improve dementia knowledge and awareness among younger generations.

It's an important and timely finding, particularly given the world's ageing population and the prevalence of dementia among older people.

"Children are our future leaders, they're our local shop keepers, bankers, and neighbours. If we're to improve dementia understanding, we need to invest in the education of our children," Dr Smith says.

"Children generally don't know much about people living with dementia - unless they have a family member of family friend that has the condition.

"When children are in primary school, their minds and health beliefs are still malleable; this is when they're open to learning about new ideas. So, it's an ideal time to educate them about challenging topics, like dementia.

"Recent findings from the Lancet commission (into dementia prevention, intervention and care) suggests that a low level of education is the number one risk factor in early life that contributes to later life dementia.

"By teaching children about dementia, we're not only improving their knowledge and fostering positive attitudes towards dementia now, but maybe even reducing their own future risk of dementia as an adult - it's exciting stuff."

The intergenerational dementia education program (entitled Forget me not ) was developed in partnership with the City of Unley, Unley Primary School and aged-care provider ECH.

The program brought together 90 Year four and five students who, over an eight-week period learned about dementia and interacted with older adults, many of whom had a cognitive impairment or dementia diagnosis. Through co-operative activities such as arts and crafts, gardening and playing pool, the older adults took on the role of teachers, mentors and coaches, while the children developed lifelong skills in communication and empathy.

After completing the program, children showed significant increases in dementia knowledge and attitudes, with observed improvements in communication, empathy and understanding, inclusivity and personhood (viewing a someone with dementia as a valued individual and person).

The older people also enjoyed the interaction, felt engaged with community and that they were valued members of society.

"You only need to look at the current state of Australia's aged care system to see the acute need for better education in this area.

"We know this type of education works; the next step is to find ways to upscale this more broadly."

* Dementia is an incurable clustering of neurodegenerative conditions that affect cognitive development, memory, and behaviour.

* The Forget me not program has been developed with support from the State Government's Office for the Ageing and the UniSA Research Themes Investment Scheme grants.

* For every student who demonstrated an increase in dementia knowledge and attitudes, the program cost $600.

Journal
Frontiers in Public Health
Funder
JR, RM, Office for Aging Well formally Office for the Aging) through an Age-Friendly SA grant awarded to The City of Unley and a University of SouthAustralia Research Themes Investment Scheme grant awarded to AS
DOI
10.3389/fpubh.2020.00248

Participants of the Forget Me Not Program 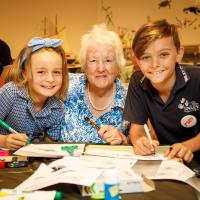 Forget Me Not Participants