Some anticancer agents intend to disturb the function of the p97 protein complex, which is essential for survival of cancer cells. A team of researchers of the Max Delbrück Center for Molecular Medicine in the Helmholtz Association (MDC) has now found a way to break up the p97 complex into its subunits and published their results in Nature Communications.

Many proteins organize in so-called protein complexes, joining forces to fulfill certain tasks. The ring-shaped p97 protein complex is such a molecular machine, which consists of an assembly of six identical subunits and is involved in disposal of cellular garbage and other tasks. Cancer cells produce particularly large amounts of protein and therefore a lot of waste, that's why p97 is essential for their survival.

For this reason, disturbing the function of the p97 complex may be a promising new way to kill proliferating cancerous cells in a targeted manner. "The idea is, if we block this protein the cellular protein garbage will not be cleared, the cell gets choked with its own garbage and commits suicide," says researcher Dr. Anup Arumughan, who plays a leading role in the project. Several research groups have been trying to inhibit p97 selectively using drugs, but with limited success.

Working in the lab of MDC group leader Prof. Erich Wanker and collaborating with Dr. Yvette Roske and Prof. Udo Heinemann as well as with several other MDC labs, Arumughan identified a protein which not only inhibits, but also dissembles the p97 machine.

Arumughan used the "yeast two hybrid" method in yeast cells to identify proteins that like to mingle with p97. Because this type of yeast experiments is often unreliable, he used its results as a basis for a new series of experiments with mammalian cell cultures. This combination of experiments created a catalog of proteins interacting with p97 with different affinities.

A protein called ASPL with high affinity p97 showed up in the tests. ASPL, just as p97, is a component of the cellular waste disposal. On closer inspection, it turned out that the ASPL broke p97 into its subunits: "The six subunits of p97 have an immense attraction to each other. I would have thought it would extremely hard or just impossible to disrupt such a stable protein complex," Arumughan says.

To better understand the effect of ASPL on p97, Arumughan and his colleagues studied the three-dimensional structure of the binding partners. Instead of a circular structure of six subunits, they found a tetrameric complex of two p97 and ASPL molecules each.

In further experiments Arumughan identified the part of ASPL which can disrupt the p97 hexamer. The researcher trimmed the ASPL protein down to a section which exists also in numerous other proteins in a similar form. The fragment, known as "UBX", usually recognizes and binds to the p97 protein complex. In ASPL however, the UBX module does not only serve for docking to p97, but also to break it down into its subunits: "It seems as if nature took a known binding motif, and just attached two additional arms in order to get the job done," Arumughan says about the newly found protein fragment now called "extended UBX" (eUBX).

ASPL or its eUBX module cannot be used as cancer treatments. The molecules are so large that they cannot penetrate into the cell from the outside.

However, it now may be easier to find smaller molecules, which act in a manner similar to ASPL. "Our findings could help others to identify drugs that disrupt the structure of p97, in the same manner as ASPL does", group leader Erich Wanker says. But first the researchers want to find out about which cellular function the newly discovered p97/ASPL complex fulfills, because this is still completely unknown. 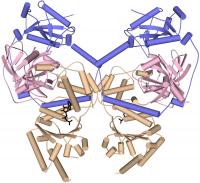 Structural Model of the p97:ASPL Complex