The ability to undertake in vivo imaging of a living brain in a mammalian animal model is crucial for elucidating how the brain functions. However, the brain consists of tens of billions of neurons, each connected with thousands of others via synapses, the sites of communication between neurons that allows transmission of information. Thus, to truly understand the dynamics of neuronal synaptic interactions, the capacity for morphological and functional imaging of the brain at high spatial and temporal resolution is required.

Currently, scientists have many ways of imaging the brain, but the available solutions are greatly limited. Electron microscopy can provide high spatial resolution, yet is unsuitable for live imaging of biological tissues. Common non-invasive technologies, such as CT, MRI/ fMRI, PET and ultrasound, have limited synaptic resolution. Although optical microscopy provides subcellular resolution and is non-toxic to biological samples, its imaging depth is limited by optical scattering and aberrations induced by the tissues and the imaging system. Meanwhile, two-photon microscopy is restricted to imaging of the cortex regions only, leaving the subcortical and deep-brain structures unreachable.

Recognizing the need for improved imaging capabilities, a group of scientists from the Hong Kong University of Science and Technology (HKUST) focused their sights on achieving brain imaging at synaptic resolution. The endeavor, a collaborative effort between Prof. QU Jianan, Professor at the Department of Electronic and Computer Engineering, and Prof. Nancy IP, Vice-President for Research and Development and the Morningside Professor of Life Science, has led to the successful development of a new imaging technology - adaptive optics two photon endomicroscopy - that enables in vivo imaging of deep brain structures at high resolution. Remarkably, this technology can shed light on brain functions in regions that have never been well explored.

The group subsequently utilized the adaptive optics two photon endomicroscopy system to investigate neuronal plasticity in the hippocampus, a critical deep brain structure, and revealed the relationship between somatic and dendritic activity of pyramidal neurons within the hippocampus. The findings of this study were recently published in the journal Science Advances on September 30, 2020.

"This technology enables imaging of other deep brain structures such as the striatum, the substantia nigra, and the hypothalamus," said Prof. Qu. "Thus, it is an exciting development and holds great potential for understanding brain functions and facilitating neuroscience research in the deeper parts of the brain."

Prof. Ip, whose research aims to understand the impairment of neuronal communication at the hippocampus in Alzheimer's disease, is especially interested in developing ways to improve neuronal communication in the hippocampus. The ability to visualize changes in the number and size of dendritic spines, where the synapses are located, will immensely improve understanding of how neurotransmission is regulated during memory impairment, or after treatment with a therapeutic drug candidate.

"The development of the two-photon endomicroscopy system is significant. We can now examine the dynamic changes of structural synapses in the hippocampus", noted Prof. Ip. "Meanwhile, we are also able to examine the firing activities of different populations of neurons in the hippocampus. This will facilitate our understanding of the molecular basis of learning and memory and its deregulation in memory dysfunctions in many neurological diseases."

In their study, the group sought to image hippocampal neurons using a miniature endoscope called the GRIN lens. However, the resolution of the GRIN lens is low and the imaging field-of-view is limited. Thus, tiny structures such as dendritic spines, the protrusions of neurons that receive information from neighboring neurons, cannot be seen clearly. This is where adaptive optics technology comes into play. Originally developed for ground-based astronomical telescopes to compensate for the light distortion of the atmosphere, the adaptive optics technology employs a bright star, or a so-called "guide star", to measure the light distortion of the atmosphere and then compensates for the distortion by using a deformable mirror. In developing the adaptive optics two-photon microscopy system, the HKUST group similarly used a localized fluorescence signal as the "guide star" inside biological tissues, which allowed them to measure the aberration of the endoscope as well as the brain tissue.

"The ability to conduct live imaging of the deep brain at high resolution has long been a challenge. With adaptive optics two-photon endomicroscopy, we can now study the structures and functions of the deep brain at an unprecedented resolution, which will greatly accelerate our progress in understanding the mechanisms of many neurodegenerative diseases and in developing related treatments," said Prof. Qu. 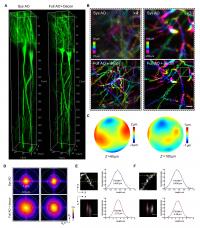 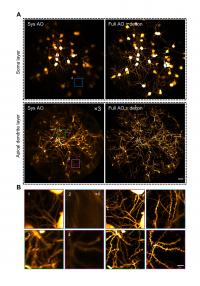