NASA's Tropical Rainfall Measuring Mission or TRMM Satellite passed over Guam as heavy rain fell over the island while Tropical Storm Halong's center passed just to the north of the island.

At NASA's Goddard Space Flight Center in Greenbelt, Maryland TRMM data was used to create a rainfall analysis. The analysis derived TRMM's Microwave Imager (TMI) and Precipitation Radar (PR) data was overlaid on a visible/infrared image from Japan's MTSAT-2 satellite at 0900 UTC to provide an entire picture of the storm and its rainfall distribution. TRMM PR revealed that rain was falling at a rate of over 85.6 mm (about 3.4 inches) per hour in bands wrapping around Halong's southeastern side.

A simulated 3-D view of Halong (from the northwest) was produced at NASA Goddard using radar reflectivity data from TRMM's Precipitation Radar (PR) instrument. The image showed a slice near the southern edge of the tropical storm's center found thunderstorms reaching heights of over 16.7 km (about 10.4 miles). The release of energy within these intense thunderstorm towers often portends a tropical cyclone's intensification.

The Joint Typhoon Warning Center is forecasting Halong to continue moving to the west-northwest and to intensify. 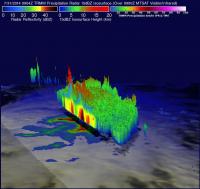