On any given day, there are approximately 1,300 to 3,200 people on the wait list for a lung transplant in the United States, according to the U.S. Department of Health and Human Services. The average wait time for donor lungs is 180 days.

Recently, the lung transplant team at UC San Diego Health performed San Diego County's first transplant surgery with lungs donated after cardiac death, an approach that could mean more opportunities to save the lives of those in critical need of new lungs.

"We have successfully performed two lung transplants using lungs from donors whose hearts had stopped functioning prior to organ removal. The recipients of those donated lungs are recovering well, and both have good prognoses," said Eugene Golts, MD, surgical director of the lung transplant program at UC San Diego Health. "Organ donation after cardiac death is one possible solution to the current organ shortage we face because it could expand the pool of potential donors."

Standard practice for lung transplant requires that all organs, except the brain, be functional at the time of donation. This is known as donation after brain death, or DBD. Brain death is diagnosed when two independent physicians examine the comatose patient and note the absence of brain activity with no possibility of functional recovery and the inability of the patient to breathe without assistance from a mechanical ventilator.

During donation after cardiac death (DCD), the lungs are procured from patients who have died because their heart has stopped -- either naturally or because physicians discontinued life support, in accordance with the donor's or donor family's wishes. The transplant team waits a prescribed amount of minutes to remove the lungs after the donor has passed and no organs are functioning. It requires significant coordination and rapid decision-making under severe time constraints.

The procuring team coordinates this process in the operating room of the donor's hospital. A team confirms no electrical activity in the heart before proceeding. After declaration of cardiac death, teams combine efforts to visually assess all organs potentially viable for transplantation.

Using a lung perfusion machine, the transplant team tests the donor lungs outside of the body before transplantation to ensure high organ quality. The surgeons are able to visually inspect the lungs, perform biopsies, check gas exchange function, conduct x-rays and remove secretions.

"The process takes approximately four hours. During this time, we care for the lungs as we would for our patients. It is quite incredible to see the lungs inflate and deflate rhythmically in the large, transparent incubator," said Golts.

DCD transplants in the U.S. have been performed with other organs, including the kidney and liver. Now, with the method being applied to lung transplants, experts say it could expand suitable lung donor availability by a significant percentage.

"Almost all of our patients are fearful of dying while waiting for donor lungs. In addition to the challenges of performing their daily activities, they suffer from anxiety, panic attacks and depression. For many, this fear becomes a reality given the high risk of death with severe pulmonary exacerbation," said Kamyar Afshar, DO, medical director of the lung transplant program at UC San Diego Health.

"The lung transplant team at UC San Diego Health aims for our patients to live well longer, to celebrate more birthdays and to build upon memories with their loved ones. The donation after cardiac death is another option we are providing to the many treatment and donation options we already have."

Both Golts and Afshar said none of these life-saving transplant approaches would be possible without the generosity of the organ donors and their families.

"It is so important to sign up to be an organ donor. By doing so, you are giving the ultimate gift to recipients, new lungs and a new life," said Golts. 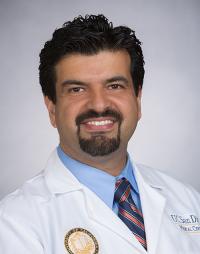