The first study to investigate how dog brains process speech shows that our best friends in the animal kingdom care about both what we say and how we say it. Dogs, like people, use the left hemisphere to process words, a right hemisphere brain region to process intonation, and praising activates dog's reward center only when both words and intonation match, according to a study in Science.

The findings of a Hungarian research group suggest that the neural mechanisms to process words evolved much earlier than previously thought, and they are not unique to the human brain, the researchers say. It shows that if an environment is rich in speech, as is the case of family dogs, word meaning representations can arise in the brain, even in a non-primate mammal that is not able to speak.

"During speech processing, there is a well-known distribution of labor in the human brain. It is mainly the left hemisphere's job to process word meaning, and the right hemisphere's job to process intonation. The human brain not only separately analyzes what we say and how we say it, but also integrates the two types of information, to arrive at a unified meaning. Our findings suggest that dogs can also do all that, and they use very similar brain mechanisms," said lead researcher Attila Andics of Department of Ethology and MTA-ELTE Comparative Ethology Research Group at Eötvös Loránd University, Budapest.

"We trained thirteen dogs to lay completely motionless in an fMRI brain scanner. fMRI provides a non-invasive, harmless way of measurement that dogs enjoy to take part of," said Márta Gácsi, ethologist, the developer of the training method, author of the study. "We measured dogs' brain activity as they listened to their trainer's speech," explains Anna Gábor, PhD student, author of the study. "Dogs heard praise words in praising intonation, praise words in neutral intonation, and also neutral conjunction words, meaningless to them, in praising and neutral intonations. We looked for brain regions that differentiated between meaningful and meaningless words, or between praising and non-praising intonations."

The brain activation images showed that dogs prefer to use their left hemisphere to process meaningful but not meaningless words. This left bias was present for weak and strong levels of brain activations as well, and it was independent of intonation. Dogs activate a right hemisphere brain area to tell apart praising and non-praising intonation. This was the same auditory brain region that this group of researchers previously found in dogs for processing emotional non-speech sounds from both dogs and humans, suggesting that intonation processing mechanisms are not specific to speech.

Andics and colleagues also noted that praise activated dogs' reward center - the brain region which responds to all sorts of pleasurable stimuli, like food, sex, being petted, or even nice music in humans. Importantly, the reward center was active only when dogs heard praise words in praising intonation. "It shows that for dogs, a nice praise can very well work as a reward, but it works best if both words and intonation match. So dogs not only tell apart what we say and how we say it, but they can also combine the two, for a correct interpretation of what those words really meant. Again, this is very similar to what human brains do," Andics said.

This study is the first step to understanding how dogs interpret human speech, and these results can also help to make communication and cooperation between dogs and humans even more efficient, the researchers say.

These findings also have important conclusions about humans. "Our research sheds new light on the emergence of words during language evolution. What makes words uniquely human is not a special neural capacity, but our invention of using them," Andics explains. 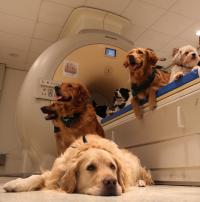