Researchers have discovered what may be the earliest dinosaur, a creature the size of a Labrador retriever, but with a five foot-long tail, that walked the Earth about 10 million years before more familiar dinosaurs like the small, swift-footed Eoraptor and Herrerasaurus.

The findings mean that the dinosaur lineage appeared 10 million to 15 million years earlier than fossils previously showed, originating in the Middle Triassic rather than in the Late Triassic period.

"If the newly named Nyasasaurus parringtoni is not the earliest dinosaur, then it is the closest relative found so far," according to Sterling Nesbitt, a University of Washington postdoctoral researcher in biology and lead author of a paper published online Dec. 5 in Biology Letters, a journal of the United Kingdom's Royal Society.

"For 150 years, people have been suggesting that there should be Middle Triassic dinosaurs, but all the evidence is ambiguous," he said. "Some scientists used fossilized footprints, but we now know that other animals from that time have a very similar foot. Other scientists pointed to a single dinosaur-like characteristic in a single bone, but that can be misleading because some characteristics evolved in a number of reptile groups and are not a result of a shared ancestry."

The researchers had one humerus – or upper arm bone – and six vertebrae to work with. They determined that the animal likely stood upright, measured 7 to 10 feet in length (2 to 3 meters), was as tall as 3 feet at the hip (1 meter) and may have weighed between 45 and 135 pounds (20 to 60 kilograms).

The fossilized bones were collected in the 1930s from Tanzania, but it may not be correct to say dinosaurs originated in that country. When Nyasasaurus parringtoni lived, the world's continents were joined in the landmass called Pangaea. Tanzania would have been part of Southern Pangaea that included Africa, South America, Antarctica and Australia.

Another example is the upper arm bone's distinctively enlarged crest, needed to anchor the upper arm muscles. The feature, known as an elongated deltopectoral crest, is also common to all early dinosaurs.

"Nyasasaurus and its age have important implications regardless of whether this taxon is a dinosaur or the closest relatives of dinosaurs," Nesbitt said. "It establishes that dinosaurs likely evolved earlier than previously expected and refutes the idea that dinosaur diversity burst onto the scene in the Late Triassic, a burst of diversification unseen in any other groups at that time."

It now appears that dinosaurs were just part of a large diversification of archosaurs. Archosaurs were among the dominant land animals during the Triassic period 250 million to 200 million years ago and include dinosaurs, crocodiles and their kin.

"Dinosaurs are just part of this archosaur diversification, an explosion of new forms soon after the Permian extinction," Nesbitt said.

The specimen used to identify the new species is part of the collection at the Natural History Museum, London. Four vertebrae from a second specimen of Nyasasaurus, which were also used in this research, are housed in the South African Museum in Cape Town. The work was funded by the National Science Foundation and the Natural History Museum, London. The fourth co-author on the paper is Christian Sidor, UW professor of biology.

The name Nyasasaurus parringtoni is new, but "Nyasasaurus" – combining the lake name Nyasa with the term "saurus" for lizard – is not. The late paleontologist Alan Charig, included as a co-author on the paper, named the specimen but never documented or published in a way that was formally recognized. "Parringtoni" is in honor of University of Cambridge's Rex Parrington, who collected the specimens in the 1930s.

"What's really neat about this specimen is that it has a lot of history. Found in the '30s, first described in the 1950s but never published, then its name pops up but is never validated. Now 80 years later, we're putting it all together," Nesbitt said.

"This work highlights the important role of museums in housing specimens whose scientific importance might be overlooked unless studied and restudied in detail," Barrett said. "Many of the more important discoveries in paleontology are made in the lab, or museum storerooms, as well as in the field."

The following fact sheet was developed by co-authors of "The oldest dinosaur? A Middle Triassic dinosauriform from Tanzania," being published online Dec. 5, 2012, in Biology Letters.

Nyasasaurus parringtoni is either the oldest dinosaur or the closest relative to dinosaurs that has been found to date.

Nyasasaurus parringtoni shows that dinosaurs likely appeared in the fossil record 10 million to 15 million years earlier than expected and this suggests that dinosaurs were not a dominant vertebrate group during their early evolution.

We can say, with confidence, that the lineage leading to dinosaurs evolved by the Anisian (early part of the Middle Triassic epoch, approximately 243 million years ago).

Fast growth, typical of most dinosaurs, is recorded in the bones of Nyasasaurus in the Middle Triassic.

Our analysis supports the hypothesis that dinosaurs first evolved in the southern portion of the supercontinent of Pangaea.

Nyasasaurus parringtoni was named for one of the nearby great rift lakes of Africa – a combination of the lake name Nyasa with the term "saurus" for lizard – and for the person (Rex Parrington) that discovered the holotype (parringtoni). (Note that Lake Nyasa is today called Lake Malawi.)

It is estimate that Nyasasaurus was 2-3 meters in length and about 0.5 to 1 meters tall at the hip (size of a Labrador retriever, but with a very long tail).

Nyasasaurus is either a dinosaur or the closest relative of dinosaurs discovered to date.

Nyasasaurus is more closely related to birds than to crocodylians.

Ornithodira is the lineage leading to birds; this group includes the common ancestor of pterosaurs, dinosaurs and all their descendants (including living and fossil birds).

Archosaurs are reptiles that are more closely related to crocodylians and birds than to lizards, snakes and turtles.

Nyasasaurus shares many features of dinosaurs including characteristics of the bones and rapid growth.

Nyasasaurus is only known from a few bones – specifically, only parts of the backbone (six vertebrae) and upper arm bone (right humerus).

Nyasasaurus fossils were excavated from the Manda beds of southwestern Tanzania.

The Triassic Period lasted from 252 million to 201 million years ago, and the following animals arose during this time: dinosaurs, crocodile relatives, mammals, pterosaurs, turtles, frogs and lizards.

During the Triassic, the continents were coalesced into a single landmass named Pangaea. At that time, what is now the country of Tanzania was located approximately 50 degrees south of the equator, much farther south than it is today.

The presence of Nyasasaurus there is consistent with a dinosaurian origin in the southern hemisphere.

Nyasasaurus was discovered in the early 1930s on a paleontological expedition to the Ruhuhu Valley of Southern Tanzania by Rex Parrington of the University of Cambridge.

Nyasasaurus fossils are housed at the Natural History Museum, London and the South African Museum in Cape Town, South Africa.

Alan Charig (deceased) studied Nyasasaurus for 50 years but was unable to publish his report on the animal before he died.

Our paper does not say…

That Nyasasaurus is a direct ancestor of all other dinosaurs.

That the ancestors of dinosaurs evolved in Tanzania. 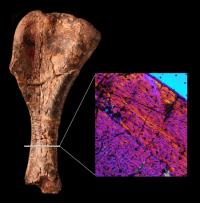