Pollution from historic mining activities in south west England has led to a reduction in genetic diversity of brown trout according to new research from the University of Exeter. The findings, which will be published on Friday 15 May in the journal Evolutionary Applications, indicate that human activity can alter the genetic patterns of wild populations - an important issue in modern conservation.

The prevalence of metal contaminants in rivers across the south west of England is directly linked to mining activities dating back hundreds of years. Exposure to high concentrations of metals can be detrimental to fish health, negatively impacting their genetic diversity and population structure.

Josephine Paris, lead author and postgraduate researcher at the University of Exeter said: "Our research shows that brown trout populations have been severely affected by both historical and contemporary mining practices. The effects of both metal contamination and changes in environmental geochemistry have driven dramatic changes in the genetic architecture of these fish. In the case of the Industrial Revolution, these shifts have occurred in less than 200 years, showing the speed and magnitude at which human activity can alter the genetics of species."

To investigate the genetic impacts of metal pollution, the researchers compared DNA samples from fifteen brown trout populations from heavily-polluted and 'clean' rivers.

Genetic analysis revealed that all trout populations from metal contaminated rivers derived from a single common ancestor approximately 960 years ago, during the medieval period when tin mining in the region is first documented. Metal contamination at this time led to genetically distinct populations in different rivers.

Around 150 years ago, during the Industrial Revolution, further genetic separation occurred when rivers were again polluted with significantly increased levels of metal contaminants. During this period, trout numbers substantially declined in heavily polluted areas like the River Hayle. Those trout that remained were less genetically diverse than trout in clean rivers.

Co-author Dr Andrew King Research Fellow in Biosciences at the University of Exeter said: "Trout in the metal contaminated rivers have evolved to live in water with metal concentrations that kill metal naïve fish. The metal contaminated populations are genetically distinct from one another and we think this is a response to the unique cocktail of metals found in each river. This raises the interesting question as to whether the ability to live in contaminated water has evolved once or multiple times."

The River Camel and the River Fal are considered 'clean' rivers, although they do contain some metals due to the underlying geology and ancient mining activity. Other rivers, including the River Hayle and the Red River, are known as 'metal rivers' as they contain significantly elevated levels of metal contaminants.

The research was conducted by Josephine Paris, PhD Biosciences student, Dr. Andrew King and Dr. Jamie Stevens of the Molecular Ecology and Evolution Group at the University of Exeter. Human mining activity across the ages determines the genetic structure of modern brown trout (Salmo trutta L.) populations is published in Evolutionary Applications.

The University has invested strategically to deliver more than £350 million worth of new facilities across its campuses in the last few years; including landmark new student services centres - the Forum in Exeter and The Exchange on the Penryn Campus in Cornwall, together with world-class new facilities for Biosciences, the Business School and the Environment and Sustainability Institute. There are plans for another £330 million of investment between now and 2016. http://www.exeter.ac.uk 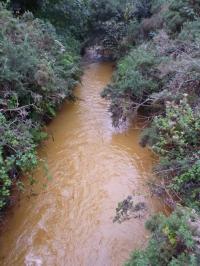