A major revision is required in our understanding of our Milky Way Galaxy according to an international team led by Prof Noriyuki Matsunaga of the University of Tokyo. The Japanese, South African and Italian astronomers find that there is a huge region around the centre of our own Galaxy, which is devoid of young stars. The team publish their work in a paper in Monthly Notices of the Royal Astronomical Society.

The Milky Way is a spiral galaxy containing many billions of stars with our Sun about 26,000 light years from its centre. Measuring the distribution of these stars is crucial to our understanding of how our Galaxy formed and evolved. Pulsating stars called Cepheids are ideal for this. They are much younger (between 10 and 300 million years old) than our Sun (4.6 billion years old) and they pulsate in brightness in a regular cycle. The length of this cycle is related to the luminosity of the Cepheid, so if astronomers monitor them they can establish how bright the star really is, compare it with what we see from Earth, and work out its distance.

Despite this, finding Cepheids in the inner Milky Way is difficult, as the Galaxy is full of interstellar dust which blocks out light and hides many stars from view. Matsunaga's team compensated for this, with an analysis of near-infrared observations made with a Japanese-South African telescope located at Sutherland, South Africa. To their surprise they found hardly any Cepheids in a huge region stretching for thousands of light years from the core of the Galaxy.

Noriyuki Matsunaga explains: "We already found some while ago that there are Cepheids in the central heart of our Milky Way (in a region about 150 light years in radius). Now we find that outside this there is a huge Cepheid desert extending out to 8000 light years from the centre."

This suggests that a large part of our Galaxy, called the Extreme Inner Disk, has no young stars. Co-author Michael Feast notes: "Our conclusions are contrary to other recent work, but in line with the work of radio astronomers who see no new stars being born in this desert."

Another author, Giuseppe Bono, points out: "The current results indicate that there has been no significant star formation in this large region over hundreds of millions years. The movement and the chemical composition of the new Cepheids are helping us to better understand the formation and evolution of the Milky Way."

Cepheids have more typically been used to measure the distances of objects in the distant Universe, and the new work is an example instead of the same technique revealing the structure of our own Milky Way.

https://www.ras.org.uk/images/stories/press/MilkyWay/fig11.jpg
An artist's illustration of the Milky Way, the Galaxy we live in, with the locations of the newly discovered Cepheid stars marked by the yellow points. The previously known objects, located around the Sun (marked by a red cross), are indicated by small white dots. The central green circle around the core of the galaxy marks the location of the 'Cepheid desert'. Credit: The University of Tokyo

https://www.ras.org.uk/images/stories/press/MilkyWay/fig3b.jpg
An artist's impression of the implied distribution of young stars, represented here by Cepheids shown as red or blue points plotted on the background of a drawing of the Milky Way. With the exception of a small clump in the Galactic centre, the central 8000 light years appear to have very few Cepheids, and hence very few young stars. Credit: The University of Tokyo

After the embargo expires, a copy of the paper will be available for free download from http://mnras.oxfordjournals.org/lookup/doi/10.1093/mnras/stw1548

The Royal Astronomical Society (RAS, http://www.ras.org.uk), founded in 1820, encourages and promotes the study of astronomy, solar-system science, geophysics and closely related branches of science. The RAS organizes scientific meetings, publishes international research and review journals, recognizes outstanding achievements by the award of medals and prizes, maintains an extensive library, supports education through grants and outreach activities and represents UK astronomy nationally and internationally. Its more than 4000 members (Fellows), a third based overseas, include scientific researchers in universities, observatories and laboratories as well as historians of astronomy and others.

A giant stellar void in the Milky Way 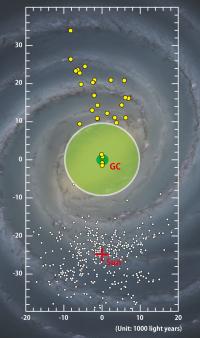