In August 2011, scientists at the UC Davis Bodega Marine Laboratory walked into their labs to a strange, disturbing sight: Thousands of purple sea urchins and other marine invertebrates were dead in their tanks, which are fed directly by seawater. Outside, the tea-colored ocean washed up carcasses of red abalone, large sea stars, and football-sized, snail-like chitons.

Less conspicuous--but even more heavily impacted as a population--were the millions of purple sea urchins and tiny sea stars that died along a 62-mile stretch of coast in Northern California, according to a UC Davis-led study published in the journal PLOS ONE that documents the die-off.

"We might not have known urchins and six-armed sea stars were affected if lab-held animals hadn't died right in front of us," said the study's lead author Laura Jurgens, a graduate student at UC Davis Bodega Marine Laboratory who earned her doctorate in May.

The scientists documented almost 100 percent mortality of purple sea urchins and six-armed sea stars over the study area, which stretched from southern Mendocino County to Bodega Bay in Sonoma County. Intertidal zones that once looked like pools of purple held only burrows in the bedrock--telltale markers that purple sea urchins were once there. Only 10 purple urchins were found in an area once home to millions of them.

The disappearance of these species to the area suggests long-term population and ecosystem consequences, the study said.

The silver-dollar-sized, six-armed sea star is a key tide-pool predator, and purple sea urchins serve as cleanup crews and recyclers for kelp detritus that washes ashore, processing the kelp into nutrients. Purple sea urchins also provide food for shorebirds and some mammals living along the coast.

Instead, the study said the mass mortality was likely caused by a harmful algal bloom. Such blooms are expected to occur more often due to the combination of global warming, ocean acidification, and land-use changes.

Jurgens said that is all the more reason why documenting such mass mortality events is important to better understand -- and prepare for --trends happening to ocean ecosystems.

Purple sea urchins have begun to recolonize the area. But it might be decades before the more home-bodied six-armed sea stars return to the area, since their babies can only crawl small distances away from their mothers. Males and females would need to arrive on floating debris to begin to repopulate the species here, which Jurgens said is unlikely to happen very often.

"If someone were to come to this area, they wouldn't know these six-armed sea stars existed here, even though this has been a main part of their species range," Jurgens said. "If something disappears and we don't document it, we might not ever know it was there, and we might forget."

The study was primarily funded by the National Science Foundation. It also received financial support from the Monitoring Enterprise, California Ocean Sciences Trust, Partnership for Interdisciplinary Studies of Coastal Oceans, the David and Lucile Packard Foundation and the California Department of Fish and Wildlife.

Trouble in the tide pools 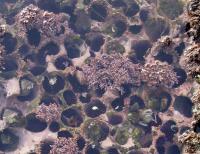 Purple Sea Urchins, before and after Die-Off