Employees who have control over the design and layout of their workspace are not only happier and healthier — they're also up to 32% more productive, according to new research from the University of Exeter in the UK.

Studies by the University's School of Psychology have revealed the potential for remarkable improvements in workers' attitudes to their jobs by allowing them to personalise their offices.

The findings challenge the conventional approach taken by most companies, where managers often create a 'lean' working environment that reflects a standardized corporate identity.

Dr Craig Knight conducted the research as part of his PhD and is now Director of PRISM – a company that deals with space issues in the workplace. He said "Most contemporary offices are functional and offer very little user control, but our studies suggest this practice needs to be challenged.

"When people feel uncomfortable in their surroundings they are less engaged – not only with the space but also with what they do in it. If they can have some control, that all changes and people report being happier at work, identifying more with their employer, and are more efficient when doing their jobs."

The research involved more than 2,000 office workers in a series of studies looking at attitudes to — and productivity within — working space. This included two surveys of workers' attitudes carried out via online questionnaires, as well as two experiments which examined workers' efficiency when carrying out tasks under different conditions.

The surveys assessed the level of control workers had over their space — ranging from none at all to being fully consulted over design changes. Workers were then asked a series of questions about how they felt about their workspace and their jobs.

Results consistently showed that the more control people had over their office spaces, the happier and more motivated they were in their jobs. They felt physically more comfortable at work, identified more with their employers, and felt more positive about their jobs in general.

Two further studies, one at the University and another in commercial offices saw participants take on a series of tasks in a workspace that was either lean (bare and functional), enriched (decorated with plants and pictures), empowered (allowing the individual to design the area) or disempowered (where the individual's design was redesigned by a 'manager').

Professor Alex Haslam, who co-authored the research, said it was time for managers to recognise the potential improvements that can be made by handing some control of space over to workers and thereby giving them an opportunity to realise their own identity in the workplace.

He said: "Not only does office design determine whether people's backs ache, it has the potential to affect how much they accomplish, how much initiative they take, and their overall professional satisfaction. Further research that we and others have carried out also highlights strong links between a lack of control over workspace and sickness in the office.

"All this could have a huge impact for firms of any size, yet employers rarely consider the psychological ramifications of the way they manage space. By paying more attention to employees' needs they can boost wellbeing and productivity at minimal cost."

The research was carried out with the help of Ambius, a firm which specialises in providing services to enrich workspaces for businesses and was jointly funded by the Economic and Social Research Council (ESRC).

Kenneth Freeman, Ambius' International Technical Director said: "This research shows that the spaces in which people work are hugely important to the way they do their jobs. It is clear that by working with employees to enrich workspace, businesses can help their workers to feel engaged and inspired, and this has clear benefits in helping companies grow and achieve their aims."

The Economic and Social Research Council (ESRC) is the UK's largest organisation for funding research on economic and social issues. It supports independent, high-quality research which has an impact on business, the public sector and the third sector. The ESRC's total expenditure in 2009/10 was about £211 million. At any one time the ESRC supports over 4,000 researchers and postgraduate students in academic institutions and independent research institutes.

The work of Craig Knight and Alex Haslam is published in two research papers.

Your Place or Mine? Organizational Identification and Comfort as Mediators of Relationships Between the Managerial Control of Workspace and Employees' Satisfaction and Well-being', is published in the British Journal of Management.

'The Relative Merits of Lean, Enriched, and Empowered Offices: An Experimental Examination of the Impact of Workspace Management Strategies on Well-Being and Productivity' is published in the Journal of Experimental Psychology: Applied.

For more information or to organise an interview with Craig Knight or Alex Haslam, please contact:

Designing your own workspace improves health, happiness and productivity 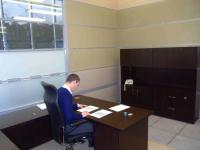