Personal computers may soon save large amounts of energy by "sleep talking." Computer scientists at UC San Diego and Microsoft Research have created a plug-and-play hardware prototype for personal computers that induces a new energy saving state known as "sleep talking." Normally PCs can be in either awake mode—where they consume power even if they are not being used, or in a low power sleep mode—where they save substantial power but are essentially inactive and unresponsive to network traffic. The new sleep talking state provides much of the energy savings of sleep mode and some of the network-and-Internet-connected convenience of awake mode.

"Large numbers of people keep their PCs in awake mode even though the PCs are relatively idle for long blocks of time because they want to stay connected to an internal network or the Internet or both," said Agarwal. "I realized that most of the tasks that people keep their computers on for—like ensuring remote access and availability for virus scans and backup, maintaining presence on instant messaging (IM) networks, being available for incoming voice-over-IP (VoIP) calls, and file sharing and downloading—can be achieved at much lower power-use levels than regular awake mode," said Agarwal.

The computer scientists named their system Somniloquy, which means "the act or habit of talking in one's sleep." In fact, the system allows a PC to appear to "say" to other hosts on the network, "I'm awake and I can perform non-power-intensive tasks"—even though the PC is in sleep mode. If more computational muscle or resources present on the PC such as stored files are required, Somniloquy wakes up the PC.

The goal of Somniloquy is to encourage people to put their PCs in sleep mode more often, for example when they are not being used for computationally demanding tasks. "Reducing energy consumed by wall-powered devices, especially computing equipment, offers a huge opportunity to save money and reduce greenhouse gasses," said Agarwal.

"Somniloquy uses a very small low-power computer. It has a low-power processor, some memory, a lightweight operating system, and a small amount of flash to store data. Everything is scaled down and extremely energy efficient," said Agarwal, a self described "computer systems" researcher who uses hardware insights to build better energy-efficient computer systems.

The current prototypes work for desktops and laptops, over wired and wireless networks, and are incrementally deployable on systems with an existing network interface. It does not require any changes to the operating system on the PC, to routers or other network infrastructure, or to remote application servers.

The researchers evaluated Somniloquy in various settings and say that it consumes 11 to 24 times less power than a PC in idle state, which could translate to energy savings of 60 to 80 percent depending on their use model.

In the future, Somniloquy could be incorporated into the network interface card of new PCs, which would eliminate the need for the prototype's external USB plug-in hardware.

Yuvraj Agarwal worked on this project when he was an intern at Microsoft Research, Cambridge in the summer of 2007, and continued afterwards at UC San Diego. Steve Hodges, Ranveer Chandra, James Scott, and Victor Bahl from Microsoft Research are Somniloquy co-inventors and authors on the NSDI 2009 paper. Agarwal's Ph.D. advisor and paper-coauthor is computer science professor Rajesh Gupta from UC San Diego's Jacobs School of Engineering. 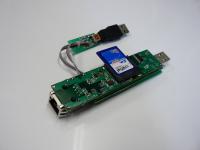