RIVERSIDE, Calif. – An abrupt release of methane, a powerful greenhouse gas, about 635 million years ago from ice sheets that then extended to Earth’s low latitudes caused a dramatic shift in climate, triggering a series of events that resulted in global warming and effectively ended the last “snowball” ice age, a UC Riverside-led study reports.

The researchers posit that the methane was released gradually at first and then in abundance from clathrates – methane ice that forms and stabilizes beneath ice sheets under specific temperatures and pressures. When the ice sheets became unstable, they collapsed, releasing pressure on the clathrates which began to degas.

“Our findings document an abrupt and catastrophic means of global warming that abruptly led from a very cold, seemingly stable climate state to a very warm also stable climate state with no pause in between,” said Martin Kennedy, a professor of geology in the Department of Earth Sciences, who led the research team.

“This tells us about the mechanism, which exists, but is dormant today, as well as the rate of change,” he added. “What we now need to know is the sensitivity of the trigger: how much forcing does it take to move from one stable state to the other, and are we approaching something like that today with current carbon dioxide warming.”

Study results appear in the May 29 issue of Nature.

According to the study, methane clathrate destabilization acted as a runaway feedback to increased warming, and was the tipping point that ended the last snowball Earth. (The snowball Earth hypothesis posits that the Earth was covered from pole to pole in a thick sheet of ice for millions of years at a time.)

“Once methane was released at low latitudes from destabilization in front of ice sheets, warming caused other clathrates to destabilize because clathrates are held in a temperature-pressure balance of a few degrees,” Kennedy said. “But not all the Earth’s methane has been released as yet. These same methane clathrates are present today in the Arctic permafrost as well as below sea level at the continental margins of the ocean, and remain dormant until triggered by warming.

“This is a major concern because it’s possible that only a little warming can unleash this trapped methane. Unzippering the methane reservoir could potentially warm the Earth tens of degrees, and the mechanism could be geologically very rapid. Such a violent, zipper-like opening of the clathrates could have triggered a catastrophic climate and biogeochemical reorganization of the ocean and atmosphere around 635 million years ago.”

Today, the Earth’s permafrost extends from the poles to approximately 60 degrees latitude. But during the last snowball Earth, which lasted from 790 to 635 million years ago, conditions were cold enough to allow clathrates to extend all the way to the equator.

According to Kennedy, the abruptness of the glacial termination, changes in ancient ocean-chemistry, and unusual chemical deposits in the oceans that occurred during the snowball Earth ice age have been a curiosity and a challenge to climate scientists for many decades.

“The geologic deposits of this period are quite different from what we find in subsequent deglaciation,” he said. “Moreover, they immediately precede the first appearance of animals on earth, suggesting some kind of environmental link. Our methane hypothesis is capable also of accounting for this odd geological, geochemical and paleooceanographic record.”

Also called marsh gas, methane is a colorless, odorless gas. As a greenhouse gas, it is about 30 times more potent than carbon dioxide, and has largely been held responsible for a warming event that occurred about 55 million years ago, when average global temperatures rose by 4-8 degrees Celsius.

When released into the ocean-atmosphere system, methane reacts with oxygen to form carbon dioxide and can cause marine dysoxia, which kills oxygen-using animals, and has been proposed as an explanation for major oceanic extinctions.

“One way to look at the present human influence on global warming is that we are conducting a global-scale experiment with Earth’s climate system,” Kennedy said. “We are witnessing an unprecedented rate of warming, with little or no knowledge of what instabilities lurk in the climate system and how they can influence life on Earth. But much the same experiment has already been conducted 635 million years ago, and the outcome is preserved in the geologic record. We see that strong forcing on the climate, not unlike the current carbon dioxide forcing, results in the activation of latent controls in the climate system that, once initiated, change the climate to a wholly different state.”

As part of their research, Kennedy and his colleagues collected hundreds of marine sediment samples in South Australia for stable isotope analysis, an important tool used in climate reconstruction. At UCR, the researchers analyzed the samples and found the broadest range of oxygen isotopic variation ever reported from marine sediments that they attribute to melting waters in ice sheets as well as destabilization of clathrates by glacial meltwater.

Next in their research, Kennedy and his colleagues will work on estimating how much of the temperature change that occurred 635 million years ago was due solely to methane.

Kennedy, who directs the Global Climate and Environmental Change Graduate Program in UCR’s Department of Earth Sciences, was joined in the study by UCR’s David Mrofka; and Chris von der Borch of Flinders University, Australia. The study was supported by grants from the National Science Foundation and NASA Exobiology.

The University of California, Riverside is a doctoral research university, a living laboratory for groundbreaking exploration of issues critical to Inland Southern California, the state and communities around the world. Reflecting California's diverse culture, UCR's enrollment of about 17,000 is projected to grow to 21,000 students by 2010. The campus is planning a medical school and already has reached the heart of the Coachella Valley by way of the UCR Palm Desert Graduate Center. With an annual statewide economic impact of nearly $1 billion, UCR is actively shaping the region's future. To learn more, visit www.ucr.edu or call (951) UCR-NEWS. 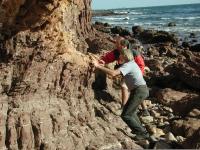