Optical superoscillation refers to a wave packet that can oscillate locally in a frequency exceeding its highest Fourier component. This intriguing phenomenon enables production of extremely localized waves that can break the optical diffraction barrier. Indeed, superoscillation has proven to be an effective technique for overcoming the diffraction barrier in optical superresolution imaging. The trouble is that strong side lobes accompany the main lobes of superoscillatory waves, which limits the field of view and hinders application.

Precise engineering of the interference of diffracted light fields emitted from complex nanostructures can produce structural masks that enable significant optical superoscillation. But structural masks require optimization and complex fabrication, and the resulting light field is still limited by high-intensity side lobes. Producing superoscillatory waves with appreciable feature size while maintaining a larger field of view has remained challenging until now.

As reported in Advanced Photonics, researchers from Jinan University, Guangzhou, China, recently developed a way to eliminate, to some extent, the tradeoffs involved in superoscillatory wave packets. They demonstrate, both experimentally and theoretically, generation of superoscillatory light spots without side lobes.

A central microdisc with cylindrical diffraction gives rise to a superoscillatory light spot of a size within the optical diffraction limit. A pair of sharp-edged apertures ensures constructive interference with the high-spatial-frequency waves. That interference effectively eliminates side lobes along a symmetric cut that can be adjusted in the transverse plane by rotating the moonlike apertures.

According to Yanwen Hu, a doctoral student working under the supervision of Zhenqiang Chen in the Department of Optoelectronic Engineering at Jinan University, "Due to its easy design, based on clear physics, the sharp-edged aperture is a promising candidate for realization of superoscillatory waves."

Hu explains further that the cylindrical diffraction of the central microdisc produces superoscillatory waves with Bessel-like forms. These forms enable the delicate structures of the superoscillatory waves propagating in free space to travel much farther than the evanescent light waves. According to Hu, this intriguing propagation effect of superoscillation holds promise for potential application in nanoparticle manipulation, as well as superresolution imaging.

Optical superoscillation without side waves 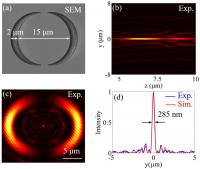