Will all of the ice on Greenland melt and flow out into the sea, bringing about a colossal rise in ocean levels on Earth, as the global temperature rises? The key concern is how stable the ice cap actually is and new Danish research from the Niels Bohr Institute at the University of Copenhagen can now show the evolution of the ice sheet 11,700 years back in time – all the way back to the start of our current warm period. The results are published in the esteemed journal Nature.

Numerous drillings have been made through both Greenland's ice sheet and small ice caps near the coast. By analysing every single annual layer in the kilometres long ice cores researchers can get detailed information about the climate of the past. But now the Danish researcher Bo Vinther and colleagues from the Centre for Ice and Climate at the Niels Bohr Institute, University of Copenhagen, in collaboration with researchers from Canada, France and Russia, have found an entirely new way of interpreting the information from the ice core drillings.

"Ice cores from different drillings show different climate histories. This could be because they were drilled at very different places on and near Greenland, but it could also be due to changes in the elevation of the ice sheet, because the elevation itself causes different temperatures" explains Bo Vinther about the theory.

Bo Vinther explains, that the four drillings through the ice sheet would have had the same climate history if there had not been changes in elevation throughout the course of time. It is known that for every 100 meter increase in elevation, there is a 0.6 per mille decrease in the level of the oxygen isotope Oxygen-18, which indicates the temperature in the air. So if there is a difference of 1.2 per mille, the elevation has changed by 200 meters.

Just after the ice age the elevation of the ice sheet rose slightly. This is because when the climate transitions from ice age to warm age, there is a rapid increase in precipitation. But at the same time, the areas lying near the coast begin to decrease in size, because the ice is melting at the edge. When the ice melts at the edge, it slowly causes the entire ice sheet to 'collapse' and become lower.

The elevations that were found with the help of the Oxygen-18 measurements from the ice cores are checked with other methods, for example, by measuring the air content, which is also dependent upon the elevation.

The new results show the evolution of elevation of the ice sheet throughout 11,700 years and they show that the ice sheet is very sensitive to the temperature. The results can be used to make new calculations for models predicting future consequences of climate changes. 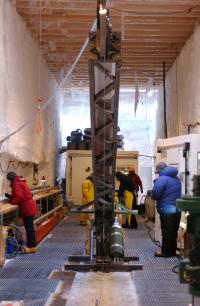