The Silk Road was the most elaborate network of trade routes in the ancient world, linking ancient populations in East Asia to those in southwest Asia, via Central Asia. These trade routes fostered the spread of ideas, religions, and technologies over the past 2,000 years. Before the establishment of organized exchange, starting around the time of the Chinese Han Dynasty (2,223 years ago), a process of trans-Eurasian exchange was already underway through the river valleys and oases of Central Asia. The establishment of populations in the oases of the Taklimakan Desert in Xinjiang, China, was a major factor facilitating this trans-Eurasian exchange. However, archaeological evidence for human occupation in these arid regions as well as long-distance diffusion of cultural material is largely lacking prior to the early fourth millennium BP. Paleoecologists have long been aware of the potential for regional climatic fluctuations in Arid Central Asia (ACA), and the shifting oases or river ways of the desert zone can influence cultural diffusion along the pre-Silk Road.

In this publication, a team of paleoclimatologists provides evidence suggesting that an extended dry period may have made it more difficult to traverse these deserts for a 640-year period in prehistory. The megadrought in ACA appears to have occurred during 5820-5180 BP, and was likely tied into a northward shift in the prevailing air masses. The dearth of archaeological evidence for sedentary human occupation in the region during this drought period suggests that the climatic conditions may have hindered human movement and effectively reduced or blocked overland travel between eastern and western Central Asia. The agricultural regions of the ancient world were isolated from each other by the high peaks of the Himalaya, but exceptionally arid climatic conditions in Central Asia may have further contributed to that cultural isolation.

The results of this international research endeavor, led by Dr. Liangcheng Tan, a professor from The Belt & Road center of the Institute of Earth Environment, through the Chinese Academy of Sciences, were recently published in Science Bulletin as a cover paper. The article is titled "Megadrought and cultural exchange along the proto-Silk Road". The research team includes collaborations with 15 scientific institutions and universities from China, the United States, Kyrgyzstan, Germany, and the United Kingdom.

Archeological studies indicate that trans-Eurasian exchange was occurring as early as the terminal 5th millennium BP, but only started in earnest during the 4th millennium BP. This exchange is marked by the dispersal of wheat, barley, sheep, goats, and cattle from West Asia into northern China. Likewise, East Asian broomcorn and foxtail millet dispersed from northern China into West Asia, and eventually on to Europe. Some scholars have referred to this process as food globalization in prehistory. The traditional narrative suggest that early movements of humans crossed the northern Eurasian steppe. However, increasingly archaeologists are recognizing that the main routes of cultural dispersal in prehistory followed the same routes as the historic Silk Road. These river valleys and desert oases fostered connections between intensive agricultural regions in prehistory.

This international team worked in collaboration with officials in Kyrgyzstan to collect stalagmites from Talisman Cave. The cave is located in the southeastern Fergana Valley, near the crossroads of the historic Silk Road. Stalagmites are cave formations that gradually accumulate over thousands of years as water drips from the cave roof and calcium precipitates out of it. These features trap in their cores a highly detailed climatic record, unlike what can be pieced together through pollen or paleolake shore studies. The researchers on this project used oxygen and carbon isotopes, as well as trace element records to track precipitation changes through time. They also used a radiometric U-Th dating techniques on the two stalagmites to reveal precipitation (rainfall and snowfall) history in ACA over the past 7,800 years. The average dating uncertainty of this method is about 6‰, and average temporal resolution of the proxies is roughly 3 years. This nuanced level of precision allows for a high-resolution precipitation record.

The climatic record illustrated frequent short-duration shifts in the precipitation regimes for this intercontinental region. The most remarkable feature of the precipitation record was a prolonged period of aridity or a megadrought lasting 640 years, between 5820 and 5180 BP. The scale of the megadrought is unlike any of the other environmental shifts that the team noted for the last 7,800 years. This period of aridity would have had significant consequences in the local environment, especially in the ephemeral desert oases. For example, the level of Lake Balkhash was at least 20 meters lower during the peak of the megadrought than at present. The scientists suggest that the megadrought resulted from a northward shift of the westerly jet. As explained by Dr. Liangcheng Tan, "the northward shift of the westerly jet could have reduced the frequency and intensity of Mediterranean storms, decreasing precipitation in the Mediterranean and parts of southwest Asia, and reducing the moisture transfer to Arid Central Asia". In addition, it strengthened and shifted the westerlies northward, decreasing the sea surface temperature of the North Atlantic, and reducing the evaporated moisture transported from the North Atlantic to ACA. The two processes could have worked together and amplified the regional effects of the other, ultimately resulting in the megadrought.

The researchers further collected up-to-date archaeological records from across Eurasia over the past 10,000 years, and found a synchronous shift in the timing of the dispersal of cultural traits across East and West Asia. Agropastoral groups did not begin to expand into ACA until after the megadrought. "No society could overcome the severity of these conditions over such a long period and the archaeological record of the area falls largely silent during this period. This suggests societies in Arid Central Asia had to abandon life around oases and relocate to areas with mountains and run-off to the north and south for reliable supplies of water", said by Prof. John Dodson from University of Wollongong. The megadrought would have hindered human movement and effectively reduced or blocked overland travel between eastern and western Central Asia along the pre-Silk Road. Instead, it may have pushed human movements further north into the Eurasian Steppe or forest steppe, further resulting in the first trans-Eurasian movements of people along the southern Siberia Steppe during the 5th millennium BP.

After the megadrought, precipitation gradually increased and the oases recovered, allowing for a demographic expansion and the beginning of cultural dispersal across ACA. Meanwhile, the development of agricultural and herding techniques, the domestication of the horse and eventually the camel further increased the mobility of agropastoral groups, which facilitated the interconnection of East and West Asian peoples by the 4th millennium BP.

Dr. Guanghui Dong of Lanzhou University, one of the paper's coauthors, think this study reveals the underlying mechanism of the spatial-temporal transformation of the Bronze Age trans-Eurasian exchange from a climatic and environmental aspect, and provides support for a better understanding of the formation of the prehistoric Silk Road. "The unusual precipitation record identified in this study could also contribute to a better understanding of the centennial- to decadal-scale hydroclimate changes in ACA, as well as predicting the future precipitation trends in this ecologically vulnerable region", said Dr. Tan. 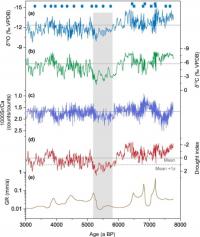