It is the most crucial mechanism in life - the division of cells. For 25 years, it has been known that bacteria split into two by forming a Z ring at their centre. They use this to cut themselves into two daughter cells. Using advanced microscopes, researchers from the universities of Harvard, Indiana, Newcastle, and Delft have succeeded in finding out how bacteria do this. The bacteria appear to build a new cell wall working from the outside in with the help of multiple molecular 'bricklayers', in about a quarter of an hour¬¬. What was completely unexpected was that the 'bricklayers' move along the inside of the wall under construction by 'treadmilling'; the building of the cell wall is performed from scaffolding that is continuously being moved at the front, while at the rear it is continuously being dismantled. The scientists will be publishing an article on the topic in Science on 17 February.

They investigated the process by viewing individual bacteria through advanced microscopes. This involved putting coloured labels on the cell wall material. By changing the colours every time, they were able to see that the bacteria were building the cell walls from the outside in. And by changing the colours of the building material with breaks of just a few seconds, they were also able to see that this is not a gradual process, but one that takes place in a different location each time. The engine that drives all of this is FtsZ, a protein that makes an arched -haped piece of polymer, and which appears to move via a phenomenon known as 'treadmilling', named after the old treadmills from the Middle Ages.

"With treadmilling, you create movement by adding something on the front, while removing something from the rear," explains Professor Cees Dekker of TU Delft, a co-author on the article. "Our research shows that a cell also uses this phenomenon for building a cell wall."

Cell walls are built with the help of a number of collaborating proteins, with FtsZ playing the most important part. "Our new discovery has solved the 25-year-old puzzle of how FtsZ coordinates cell division. The protein appears to work like a kind of scaffolding, on which the building work takes place. However, it is not rolling scaffolding, but fixed scaffolding that is continuously renovating itself: all the time, the cell is building new scaffolding boards for the work on the cell wall on, let's say, the right-hand side of the FtsZ scaffolding, while breaking up the now-superfluous scaffolding on the left-hand side, at the rear end of the work. This way, the scaffolding shifts along the cell wall. The building machine that produces the cell wall is controlled from the scaffolding, therefore moving neatly in tandem with the slowly moving scaffolding. The cell does this with different sets of scaffolding along the cell wall simultaneously, resulting in the construction of a partition wall in ten or fifteen minutes. Meanwhile, other proteins make sure that the DNA is divided properly between the two halves, for example, or that the membrane is properly closed off, and so on. The division of cells is a complex and fascinating process."

The study was a collaborative project involving researchers from four scientific groups, in the US, the UK, and Delft. The most significant contribution from Delft consisted of the production of nanostructures in which exactly one bacterium fits, lengthwise. "By placing the nanoboxes upright on the microscope, we were able to see in very sharp focus a cross-section of the cell. This gave us an excellent view of the dynamics of the FtsZ molecules. An important technical contribution." explains Dekker.

Although the study is fundamental in nature, Dekker believes that this type of research may be of practical benefit in the future. "Once we have a thorough understanding of how bacterial cells divide, it could pave the way towards alternative antibiotics. That is still some way off, but if we are able to disrupt bacterial cell division in a targeted manner, we may have new weapons in the future that we can use to fight bacteria that cause disease." 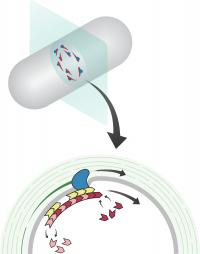 Bricklaying and Treadmillling in Bacteria 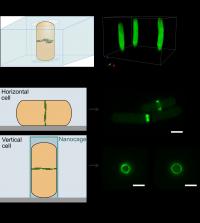