PRINCETON, N.J.– The vast loop of winds that drives climate and ocean behavior across the tropical Pacific has weakened by 3.5% since the mid-1800s, and it may weaken another 10% by 2100, according to a study led by University Corporation for Atmospheric Research (UCAR) scientist Gabriel Vecchi. The study indicates that the only plausible explanation for the slowdown is human-induced climate change. The findings appear in the May 4 issue of Nature.

The Walker circulation, which spans almost half the circumference of Earth, pushes the Pacific Ocean's trade winds from east to west, generates massive rains near Indonesia, and nourishes marine life across the equatorial Pacific and off the South American coast. Changes in the circulation, which varies in tandem with El Niño and La Niña events, can have far-reaching effects.

"The Walker circulation is fundamental to climate across the globe," says Vecchi.

In their paper, "Weakening of Tropical Pacific Atmospheric Circulation Due to Anthropogenic Forcing," the authors used observations as well as state-of-the-art computer climate model simulations to verify the slowdown and determine whether the cause is human-induced climate change. The work was performed at NOAA's Geophysical Fluid Dynamics Laboratory (GFDL), where Vecchi is stationed through the UCAR Visiting Scientist Programs. His coauthors include Brian Soden (University of Miami) and the GFDL team of Andrew Wittenberg, Isaac Held, Ants Leetmaa, and Matthew Harrison.

The Walker circulation takes the shape of a loop with rising air in the western tropical Pacific, sinking air in the eastern tropical Pacific, west-to-east winds a few miles high, and east-to-west trade winds at the surface. The trade winds also steer ocean currents. Any drop in winds produces an even larger reduction in wind-forced ocean flow--roughly twice as much in percentage terms for both the observed and projected changes, says Vecchi.

"This could have important effects on ocean ecosystems," Vecchi says. "The ocean currents driven by the trade winds supply vital nutrients to the near-surface ocean ecosystems across the equatorial Pacific, which is a major fishing region."

Several theoretical studies have shown that an increase in greenhouse gases should produce a weakening of the Walker circulation. As temperatures rise and more water evaporates from the ocean, water vapor in the lower atmosphere increases rapidly. But physical processes prevent precipitation from increasing as quickly as water vapor. Since the amount of water vapor brought to the upper atmosphere must remain in balance with precipitation, the rate at which moist air is brought from the lower to the upper atmosphere slows down to compensate. This leads to a slowing of the atmospheric circulation.

Based on observations since the mid-1800s, the paper reports a 3.5% slowdown in the Walker circulation, which corresponds closely to the number predicted by theory. To establish whether human-induced climate change is at work, Vecchi and colleagues analyzed 11 simulations using the latest version of the GFDL climate model spanning the period 1861 to 2000. Some of the simulations included the observed increase in greenhouse gases; others included just the natural climate-altering factors of volcanic eruptions and solar variations. Only the simulations that included an increase in greenhouse gases showed the Walker circulation slowing, and they did so at a rate consistent with the observations.

Based on the theoretical considerations, and extrapolating from their 1861-2000 analysis as well as from other simulations for the 21st century, the authors conclude that by 2100 the Walker circulation could slow by an additional 10%. This means the steering of ocean flow by trade winds could decrease by close to 20%.

Simulation results depend on the assumptions and conditions within different models. However, the agreement of theory, observations, and models for the past 150 years lends support to this outlook, say the authors.

The study sends mixed signals on the future of the El Nino–Southern Oscillation--the system of ocean-atmosphere linkages that produces the worldwide weather of El Nino and its counterpart, La Nina.

"The circulation has been tending to a more El Nino-like state since the 1860s," says Vecchi. "However, the dynamics involved here are distinct from those of El Nino."

UCAR is a consortium of 69 universities offering Ph.D.s in the atmospheric and related sciences. The Visiting Scientist Programs, which place UCAR scientists in research settings across the country, are managed by the UCAR Office of Programs.

Note to Editors: Reporters may obtain copies of the paper, "Weakening of Tropical Pacific Atmospheric Circulation Due to Anthropogenic Forcing," from Nature's Web site at http://press.nature.com or by calling Katie McGoldrick, Nature Washington, at 202-737-2355.

For an illustration of projected changes to the Walker circulation, contact Nita Razo, UCAR Communications, 303-497-8606 or razo@ucar.edu. 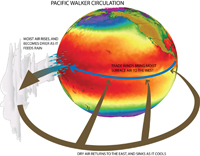