COLUMBUS, Ohio -- An international team of astronomers has discovered two planets that resemble smaller versions of Jupiter and Saturn in a solar system nearly 5,000 light years away.

The find suggests that our galaxy hosts many planetary systems like our own, said Scott Gaudi, assistant professor of astronomy at Ohio State University.

He and his colleagues reported their results in the February 15 issue of the journal Science.

The two planets were revealed when the star they orbit crossed in front of a more distant star as seen from Earth. For a two-week period from late March through early April of 2006, the nearer star magnified the light shining from the farther star.

The phenomenon is called gravitational microlensing, and this was a particularly dramatic example: the light from the more distant star was magnified 500 times.

The Optical Gravitational Lensing Experiment (OGLE) first detected the event, dubbed OGLE-2006-BLG-109, on March 28, 2006. The Microlensing Follow Up Network (MicroFUN), led by Andrew Gould, professor of astronomy at Ohio State, then joined with OGLE to organize astronomers worldwide to gather observations of it. Andrzej Udalski, professor of astronomy at Warsaw University Observatory, is the leader of OGLE.

Gaudi took the lead in analyzing the data as they came in. As he studied the light signal, he saw a distortion that he thought was caused by a Saturn-mass planet. Then, less than a day later, came an additional distortion he wasn't expecting: a "blip" in the signal that appeared to be caused by a second, larger planet orbiting the same star.

Over the next few months, Gaudi demonstrated that this two-planet interpretation was correct. Then David Bennett, a research associate professor of astrophysics and cosmology at the University of Notre Dame, refined Gaudi's preliminary model using sophisticated software, and revealed additional details about the system.

This is the third time a Jupiter-mass planet was found by microlensing, Gaudi explained. In the previous two cases, additional planets would have been very difficult to detect, had they been there.

"This is the first time we had a high-enough magnification event where we had significant sensitivity to a second planet -- and we found one." Gaudi said. "You could call it luck, but I think it might just mean that these systems are common throughout our galaxy."

Astronomers have found two planets at once before, “but using other techniques that don’t pick up on solar systems like ours,” he said.

The newly-discovered planets appear to be gaseous planets like Jupiter and Saturn -- only about 80 percent as big -- and they orbit a star about half the size of the sun. The star is dim and cold compared to ours, issuing only five percent as much light.

Still, the new solar system appears to be a smaller analog of our own. The larger planet is about as massive compared to its star as Jupiter is to ours. The smaller planet shares a similar mass ratio with Saturn.

“The temperatures are important because these dictate the amount of material that is available for planet formation,” Gaudi said. “Most theorists think that the biggest planet in our solar system formed at Jupiter's location because that is the closest to the sun that ice can form. Saturn is the next biggest because it is in the next location further away, where there is less primordial material available to form planets.”

“Theorists have wondered whether gas giants in other solar systems would form in the same way as ours did. This system seems to answer in the affirmative.”

The fact that astronomers found the planets during the first event that allowed such a detection suggests that these scaled-down versions of our solar system are very common, he added.

Previously, astronomers had found four planets using microlensing; two of those were found by the Ohio State University-based MicroFUN group. The latest two planets make six, and he expects that number to double over the next year as other teams publish new findings.

"We're just getting better at what we do," Gaudi said. "We've hit our stride with this technique."

He has also calculated that the next generation of microlensing experiments -- using telescopes on the ground and in space -- will likely be able to detect analogs to all of our solar system’s planets, except for the tiniest one, Mercury.

The current discovery relied on 11 different ground-based telescopes in countries around the world, including New Zealand, Tasmania, Israel, Chile, the Canary Islands, and the United States.

Both professional and amateur skywatchers joined in. People from three other microlensing collaborations -- the Microlensing Observations in Astrophysics (MOA) Collaboration, the Probing Lensing Anomalies NETwork (PLANET), and the RoboNet Collaboration -- all contributed observations and are co-authors of the study with MicroFUN and OGLE.

Gaudi described this microlensing event as the most complicated one ever studied. The astronomers carefully modeled their data on computers, and explored all possible explanations for the light signal. A year and a half later, they were confident that they’d found two planets. In part, their confidence came from additional observations from the W.M. Keck Observatory in Hawaii, which they used to calculate the mass of the star.

Ohio State coauthors on the Science paper included Darren DePoy and Richard Pogge, both professors of astronomy; and Subo Dong and Stephan Frank, both graduate students.

This work was sponsored by the National Science Foundation; NASA; the Polish Ministry of Scientific Research and Information Technology; the SRC Korea Science & Engineering Foundation; the Korea Astronomy & Space Science Institute; Deutsche Forschungsgemeinschaft; the Particle Physics and Astronomy Research Council; The European Union’s Framework Programme for Research and Technological Development; The Israel Science Foundation; the Marsden Fund of New Zealand; the Japan Ministry of Education, Culture, Sports, Science and Technology; and the Japan Society for the Promotion of Science. 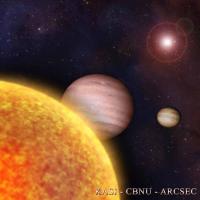 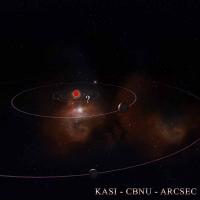