An international group of researchers led by the University of Adelaide has conducted a comprehensive genetic analysis and found no evidence of interbreeding between modern humans and the ancient humans known from fossil records in Island Southeast Asia. They did find further DNA evidence of our mysterious ancient cousins, the Denisovans, which could mean there are major discoveries to come in the region.

In the study published in Nature Ecology and Evolution, the researchers examined the genomes of more than 400 modern humans to investigate the interbreeding events between ancient humans and modern human populations who arrived at Island Southeast Asia 50,000-60,000 years ago.

In particular, they focused on detecting signatures that suggest interbreeding from deeply divergent species known from the fossil record of the area.

The region contains one of the richest fossil records (from at least 1.6 million years) documenting human evolution in the world. Currently there are three distinct ancient humans recognised from the fossil record in the area: Homo erectus, Homo floresiensis (known as Flores Island hobbits) and Homo luzonensis.

These species are known to have survived until approximately 50,000-60,000 years ago in the cases of Homo floresiensis and Homo luzonensis, and approximately 108,000 years for Homo erectus, which means they may have overlapped with the arrival of modern human populations.

The results of the study showed no evidence of interbreeding. Nevertheless, the team were able to confirm previous results showing high levels of Denisovan ancestry in the region.

Lead author and ARC Research Associate from the University of Adelaide Dr João Teixeira, said: "In contrast to our other cousins the Neanderthals, which have an extensive fossil record in Europe, the Denisovans are known almost solely from the DNA record. The only physical evidence of Denisovan existence has been a finger bone and some other fragments found in a cave in Siberia and, more recently, a piece of jaw found in the Tibetan Plateau."

"We know from our own genetic records that the Denisovans mixed with modern humans who came out of Africa 50,000-60,000 years ago both in Asia, and as the modern humans moved through Island Southeast Asia on their way to Australia.

"The mystery then remains, why haven't we found their fossils alongside the other ancient humans in the region? Do we need to re-examine the existing fossil record to consider other possibilities?"

"While the known fossils of Homo erectus, Homo floresiensis and Homo luzonensis might seem to be in the right place and time to represent the mysterious 'southern Denisovans', their ancestors were likely to have been in Island Southeast Asia at least 700,000 years ago. Meaning their lineages are too ancient to represent the Denisovans who, from their DNA, were more closely related to the Neanderthals and modern humans."

Co-author Prof Kris Helgen, Chief Scientist and Director of the Australian Museum Research Institute, said: "These analyses provide an important window into human evolution in a fascinating region, and demonstrate the need for more archaeological research in the region between mainland Asia and Australia."

Helgen added: "This research also illuminates a pattern of 'megafaunal' survival which coincides with known areas of pre-modern human occupation in this part of the world. Large animals that survive today in the region include the Komodo Dragon, the Babirusa (a pig with remarkable upturned tusks), and the Tamaraw and Anoas (small wild buffalos).

"This hints that long-term exposure to hunting pressure by ancient humans might have facilitated the survival of the megafaunal species in subsequent contacts with modern humans. Areas without documented pre-modern human occurrence, like Australia and New Guinea, saw complete extinction of land animals larger than humans over the past 50,000 years."

Dr Teixeira said: "The research corroborates previous studies that the Denisovans were in Island Southeast Asia, and that modern humans did not interbreed with more divergent human groups in the region. This opens two equally exciting possibilities: either a major discovery is on the way, or we need to re-evaluate the current fossil record of Island Southeast Asia."

"Whichever way you choose to look at it, exciting times lie ahead in palaeoanthropology."

New evidence in search for the mysterious Denisovans 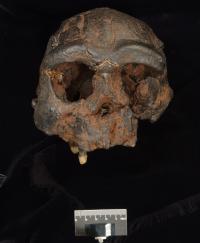