Plant beneficial microbes mediate biocontrol of diseases by interfering with pathogens or via strengthening the host, but the microorganisms' production of the plant hormones phytohormones, including cytokinins, has not been considered as a biocontrol mechanism before.

"But now we have identified a novel mechanism of how bacterial production of cytokinin contributes to the microbe's ability to control plant diseases. More specifically we identified the ability of a bacterium to efficiently control a pathogen infection in a model plant by producing cytokinin, allowing the plant to maintain tissue integrity and ultimately biomass yield," explains Post doc Dominik Kilian Grosskinsky from the Department of Plant and Environmental Sciences at University of Copenhagen.

He sees great potential in the findings:

"These results demonstrate a novel microbe based, hormone-mediated concept of biocontrol. And this mechanism provides a basis to potentially develop novel, integrated plant protection strategies combining promotion of growth, a favourable physiological status and activation of fine-tuned direct defence and abiotic stress resilience."

A new project funded by the Danish AgriFish Agency is for example already looking in to the possibilities of using the described mechanisms to shortening Christmas tree production.

Dominik Kilian Grosskinsky is working with Professor Thomas Georg Roitsch at the Department of Plant and Environmental Sciences at University of Copenhagen, and he also underlines the importance of the findings.

"My laboratory has done research in the function of the plant hormone cytokinin since the early 1990's, and this is a very important basic science breakthrough since it is the first demonstration that the production of a plant hormone by a beneficial microbe is protecting a plant from a pathogenic microbe," says Professor Thomas Georg Roitsch.

The group has also showed the close link of these plant growth stimulating hormones to regulation of plant carbohydrate metabolism, and they linked the findings to the microbial activity related green islands in autumn leaves. In addition, the group made substantial contribution to establish a link between cytokinins and the direct activation of pathogen defense mechanisms, which provided the basis for the findings of the current publication.

The findings have been published in Nature's journal Scientific Reports, and the paper comprises the first results of the project 'Cytokinin based resistance and biocontrol for plant protection' funded by the Danish Council for Independent Research | Technology and Production (Individual Postdoctoral Grant 4093-00255). 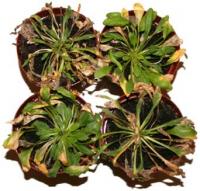