The increasing acidification of ocean waters caused by rising atmospheric carbon dioxide levels could rob sharks of their ability to sense the smell of food, a new study suggests.

"The sharks' tracking behavior and attacking behavior were significantly reduced," said Danielle Dixson, an assistant professor in the School of Biology at the Georgia Institute of Technology in Atlanta. "Sharks are like swimming noses, so chemical cues are really important for them in terms of finding food."

The study is the first time that sharks' ability to sense the odor of their food has been tested under conditions that simulate the acidity levels expected in the oceans by the turn of the century. The work supports recent research from Dixson and other research groups showing that ocean acidification impairs sensory functions and alters the behavior of aquatic organisms.

The study was published online in a recent edition of the journal Global Change Biology and was sponsored by the National Science Foundation (NSF).

Carbon dioxide released into the atmosphere is absorbed into ocean waters, where it dissolves and lowers the pH of the water. Acidic waters affect fish behavior by disrupting a specific receptor in the nervous system, called GABAA, which is present in most marine organisms with a nervous system. When GABAA stops working, neurons stop firing properly.

Dixson's previous research has shown that fish living on coral reefs where carbon dioxide seeps from the ocean floor were less able to detect predator odor than fish from normal coral reefs. Study co-author Philip Munday, from James Cook University in Australia, has shown in previous work that a tiny coral reef predator fish, the dottyback, also loses interest in food in waters that simulate ocean acidification conditions forecast for the future.

In the experimental part of the new study, conducted at Woods Hole Oceanographic Institute in Cape Cod, Massachusetts, 24 sharks from local waters were studied in a 10-meter-long flume. The flume resembled two lanes of a swimming pool. Odor from a squid was pumped down one lane of the flume, while normal seawater was pumped down the other side.

Sharks tend to prefer one side of a tank over the other, so researchers first assessed each sharks' side preference. Then the research team ran control experiments under normal ocean conditions to ensure that the sharks were tracking the food cue. Under present-day water conditions, sharks adjusted their position in the flume to spend a greater amount of time on the side containing the squid odor plume, regardless of the individual shark's natural side preference.

The food odor stream was pumped through bricks to make the plume flow better and to give the sharks a target to attack. Sharks treated under mid and high CO2 conditions also reduced their attack behavior.

"They significantly reduced their bumps and bites on the bricks compared to the control group," Dixson said. "It's like they're uninterested in their food."

Dixson noted that the study was carried out under laboratory conditions and thus does not allow for the full evaluation of the potential effects of ocean acidification on predatory abilities of the smooth dogfish.

Live food was not used as the odor cue because sharks can detect prey with their other senses, such as hearing and their ability to detect electrical impulses. By using an odor cue, the researchers were focusing on only the chemical sensing of sharks. Dixson's future work will explore how sharks' other senses might be affected by ocean acidification.

Sharks are an ancient species, and in the past have adapted to ocean acidification conditions projected for the future. But they've never had to adapt to changes happening as quickly as they are today.

"It's the rate of change that's happening that's concerning. Sharks have never had to deal with it this fast," Dixson said.

This research is supported by the National Science Foundation (NSF) under award number NSF-IOS-0843440. Any conclusions or opinions are those of the authors and do not necessarily represent the official views of the sponsoring agency. 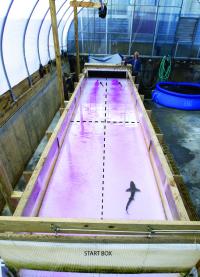 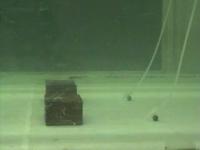