The brainchild of inventor Brandon Iglesias, the ReactWell process is a research and development project involving a reaction that converts organic material to synthetic crude oil. It can be used by refineries to upgrade their feedstock or to convert biomass to oil.

ORNL's method involves nanofabrication and catalysis science, using tiny spikes of carbon and copper to turn the greenhouse gas into a sustainable liquid.

"Our team's process is complementary to other refining techniques by providing a means to recycle carbon dioxide that would otherwise be released," said ORNL's Adam Rondinone, co-inventor of the carbon dioxide-to-ethanol catalyst. "Additionally, it can operate as a dispatchable load, which may match the intermittency of renewable sources such as wind and solar."

"This technology can offer a useful alternative to batteries for long term or portable storage of renewable electricity," he added.

The unique technology, Iglesias said, opens up opportunities to streamline energy conversion needs across many applications.

Any operation that produces a carbon dioxide byproduct can benefit. For example, ORNL's catalyst happens in one step, and when incorporated into the ReactWell process, it would remove a refinery's need to purchase additional hydrogen from a pipeline or produce additional hydrogen using steam methane reforming or electrolysis via electrolyzers.

"Running reactions in a single step without the prerequisite of generating hydrogen--having the ability to run water directly--is a very novel platform," Iglesias said. The one-step reaction could result in a significant savings on a site's upfront capital investment and long-term operating costs.

In contrast with competing processes, the ORNL catalyst uses no rare earth elements, which are expensive and can be difficult to acquire. "The reactions we have done in the past have worked well, but the catalyst and building costs in certain applications are high, and the payback periods are long," said Iglesias.

"Because the ORNL method is copper and carbon based, it will help to minimize the payback period for an attractive return on capital," he added.

Rondinone and colleagues are conducting studies to understand and improve efficiency limits, lifetime limits and poisoning tolerance. They have demonstrated that the carbon nanospikes are electrochemically stable for at least 300 hours and can be grown on a variety of substrates across wide areas.

The original research was funded by DOE's Office of Science and used resources at the ORNL's Center for Nanophase Materials Sciences, which is a DOE Office of Science User Facility. Additional funding was provided by ORNL's Technology Innovation Program.

ReactWell's license of ORNL's electrochemical process is limited to the conversion of carbon dioxide to ethanol.

Headquartered in New Orleans, Louisiana, ReactWell provides advanced technology services, products and distributed modular chemical process units for organizations in the energy, chemical, oil and gas, water and power and petrochemical industry doing business inside and out of the United States. They achieve material quality results for their clients by blending creative solutions, constrained by the laws of hard science and scarce resources.

UT-Battelle manages ORNL for DOE's Office of Science. The Office of Science is the single largest supporter of basic research in the physical sciences in the United States, and is working to address some of the most pressing challenges of our time. For more information, please visit science.energy.gov. For ORNL licensing information, contact http://www.ornl.gov/partnerships. 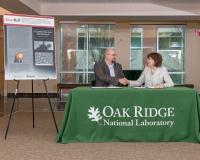 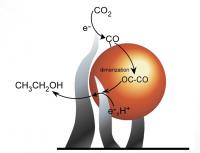