A new study reveals that the sleep patterns previously thought exclusive to mammals and birds - REM and slow-wave sleep patterns - are also found in reptiles. The results shake up our understanding of the evolution of sleep. Amniotes are a group of tetrapod vertebrates comprising reptiles, birds and mammals. Because slow-wave sleep (SWS) and rapid eye movement sleep (REMS) are thought to be exclusive to mammals and birds, it's believed that these sleep states evolved twice after mammals and birds diverged from reptiles. However, results by Mark Shein-Idelson et al. now reveal SWS and REM sleep patterns in the Australian bearded dragon, Pogona vitticeps, suggesting that the sleep states may have evolved in a common ancestor of all amniotes, more than 300 million years ago. The team implanted probes in the brains of five bearded dragons to measure their electrophysiological activity during sleep and detected identified oscillating patterns in brain activity. Similar to humans and other mammals, the dragons' demonstrated eye movements during states of non-SWS, although the reptiles were found to cycle through these two states at much briefer duration and higher frequency; whereas humans go through four or five 90-minute SWS-REMS cycles on average, the dragons' experienced 350 80-second cycles, on average. "Although similar to mammalian sleep," the authors say, "lizard SWS and REMS resemble a stripped-down version of the richer mammalian repertoire." Unexpectedly, the researchers found that these brain patterns originated from the anterior dorsal ventricular ridge and not from the cortex.

Reptiles share sleep patterns with mammals and birds after all 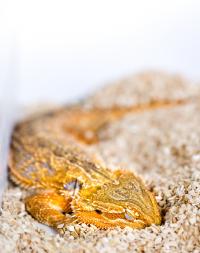