LAWRENCE -- A just-published paper in Science changes the formula scientists should use when estimating the speed of huge ice sheets in Greenland and Antarctica that flow into the ocean and drive mounting sea levels around the globe.

The change in the formula for predicting ice flow -- or basal sliding -- reduces "the largest uncertainty" in predicting future sea-level rise. It was prompted by analyzing data from 140 glaciers in Greenland.

University of Kansas researchers Leigh Stearns, associate professor of geology and research scientist at the Center for Remote Sensing of Ice Sheets, and Cornelis van der Veen, professor of geography, discovered friction -- or "basal drag" -- between ice sheets and the hard bed underneath has no influence on how fast glaciers flow.

This finding throws out a notion that has colored estimates of glacier speed for decades.

"Basal sliding is one of the most important things we try to measure in glaciology and one of the hardest to measure," said Stearns. "Our paper says the parameter most used in ice sheet models is incorrect -- the Weertman model -- developed in the 1950s based on a theoretical framework that how fast ice moves at the bed is based on friction and the amount of water at the bed. We're saying that friction doesn't matter."

Part of their work included an analysis of decades-old studies of water pressure underneath mountain glaciers, which "have been largely overlooked by the glaciological community." Stearns and van der Veen paired the mountain-glacier results with the recent observations on surface velocity from the outlet glaciers in Greenland.

"We can calculate the friction at the bed of glaciers by investigating spatial patterns of surface velocity. Surprisingly, we found that the two are not at all correlated. Pressure is different and much harder to measure. We know what the pressure at the terminus is because the glacier is floating there, and we can calculate up-flow pressure based on ice thickness. It's not a perfect estimate, but it gives us a good first approximation. If we could, we'd love to put boreholes into all 140 glaciers around Greenland and measure water pressure directly, but that's not practical."

Stearns and van der Veen found the relationship between subglacial water pressure in Greenland's outlet glaciers lined up with measurements taken from the mountain glaciers in the 1980s, implying the processes for sliding variations are also similar.

"The simplified sliding relation can appropriately reproduce spatial patterns of ice velocity," the KU researchers said. "This is in stark contrast to current modeling techniques, which involve tuning the sliding parameter in order to match observed velocities."

"Models that are used to predict sea-level change are inexact because we can't directly measure processes happening at the bed," Stearns said. "Current models using Weertman solutions require tuning to match observations. It's an imperfect way of doing what has to be done to come up with estimates. It has a lot of knobs. With this new parameter, we're trying to reduce the amount of tuning needed."

Even though "people were waiting for someone to challenge Weertman, people knew it needed to be improved," Stearns said she worried about causing upset with scientists who'd relied on the older model for earlier research.

"I was a little nervous," she said. "I was anxious because it negates what people have been using for a while. It calls into question the model they're using. But the reaction has been positive so far. People have been encouraging of a new systematic approach to a sliding law."

Stearns has too much humility to dub her new formula the "Stearns model," even though it improves and replaces the less accurate "Weertman model," named after the scientist who devised it.

She stressed her revised formula is part of the self-correcting nature of scientific inquiry and shouldn't shed doubt on climate science or the inexorable rise of sea levels around the world as more ice from Greenland and Antarctica melts into the ocean.

"I hope it helps people believe in our projections," she said. "This is based more on physical processes and less on things you have to tune for any reason. Anything that's improving how we model ice sheets in the future is a good thing -- how are ice sheets responding to climate change? With these model improvements, we're getting a step closer to a really accurate understanding." 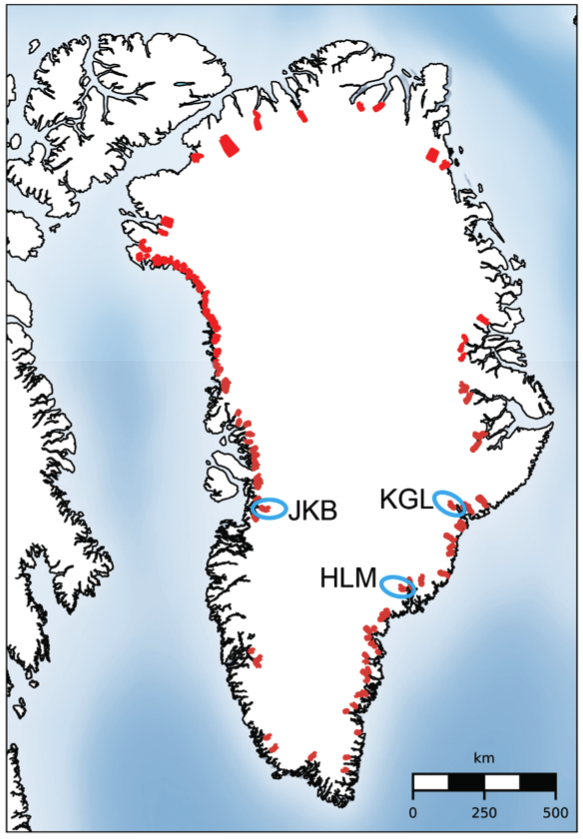 Glaciers Included in This Study