The wildfire continues to burn in the Fort McMurray area and NASA satellites continue to image the area. Fire conditions remain extreme in the province due to low humidity, high temperatures and wind according to the emergency updates being released by the Government of Alberta.

The emergency update also reported that the following communities are under an evacuation order:

Residents of Fort McMurray should not expect to return home for an extended period of time. Public safety is our number-one priority, and residents won't be able to return home until it is safe to do so.

"Currently there are more than 500 firefighters battling the blaze in and around Fort McMurray, along with 15 helicopters, 14 air tankers and 88 other pieces of equipment.

Yesterday's plan (on May 07) to evacuate 25,000 residents who fled north of Fort McMurray was a success. As of 10:00am, no evacuees have been reported remaining in camps to the north. 300 people from Fort McKay were evacuated to the Edmonton area by air and ground. This was a precautionary evacuation due to heavy smoke in the area.

1,500 employees at the Syncrude facility were evacuated on May 7 and the facility was shut down. Groups of employees have also been evacuated from the Suncor, Husky, Shell and CNRL facilities. Many of these facilities are still operating. 250 ATCO employees are in Fort McMurray working to restore the power grid and assess the gas infrastructure.

Fire conditions remain extreme, with four new starts across Alberta yesterday. A total of 34 wildfires are burning, with five out of control, 23 under control and six turned over to the responsible parties.

More than 1,500 firefighters, approximately 150 helicopters, 222 pieces of heavy equipment and more than 28 air tankers are fighting the fires across the province.

Temperature forecast for Sunday is 18°C (64 degrees F) with winds gusting up to 50 kilometres per hour (31 mph). There is the potential for showers in the Fort McMurray area."

The smoke billowing away from the fires is headed out across the Atlantic Ocean and the Aqua satellite captured this image of its movement eastward. The smoke released by any type of fire (forest, brush, crop, structure, tires, waste or wood burning) is a mixture of particles and chemicals produced by incomplete burning of carbon-containing materials. All smoke contains carbon monoxide, carbon dioxide and particulate matter (PM or soot). Because of this exposure to high levels of smoke should be avoided. 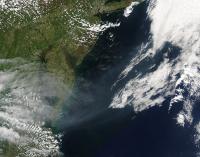 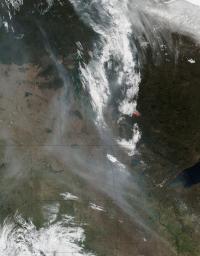