A team of researchers have found that dogs and wolves are equally good at cooperating with partners to obtain a reward. When tested in same-species pairs, dogs and wolves proved equally successful and efficient at solving a given problem. This finding suggests that basic cooperation abilities were present in a common ancestor of dogs and wolves, and have not been lost in the domestication process.

It is estimated that dogs were domesticated as much as 30,000 - 40,000 years ago, and over that span of time they have undergone many changes from their wild counterparts, wolves. In a study published in the Journal of Comparative Psychology, researchers tested dogs and wolves for the ability to coordinate their actions with a partner of the same species to obtain rewards. The wolves in the study were from Tierpark Petersberg and Wolfcenter Dörverden. The researchers from the Max Planck Institute for the Science of Human History, the Max Planck Institute for Evolutionary Anthropology, and colleagues, found that dogs and wolves performed equally well on the task, suggesting that this ability was present prior to dogs' domestication in a common ancestor. The researchers hypothesize that, since dogs have been specifically selected for their ability and willingness to cooperate with humans, they might have an even higher success rate when humans are the cooperation partner.

To test cooperation ability, the researchers created a test scenario that was designed to mimic a hunting situation, one in which multiple animals were trying to take down a larger herbivore, such as an elk or other horned prey. The concept was that, in the wild, one of the animals would need to draw the attention - and the dangerous horns - of the potential prey, so that the other could attack from the rear and bring the prey down. Thus the animal that took the most risk in the hunt also had to trust that it would be given a share of the reward in the end. The test apparatus involved a barrier separating the participants from a food reward, with two openings on opposite ends that were controlled by a researcher. When the first animal approached an opening, the door before it would shut while the opposite door remained open, allowing the partner to enter first and access the food. The door then remained open, so that other animal could then enter. Thus the animals had to cooperate in two ways - first by positioning themselves on opposite ends of the barrier and then by timing and coordinating their approaches towards the barrier.

The researchers found that the dogs and wolves were equally successful, succeeding in about three out of four trials on average. "Dogs were not outperformed by wolves in coordinating their actions, in the frequency of success or in how long the task took," explains Juliane Bräuer of the Max Planck Institute for the Science of Human History, lead author of the study and head of the DogStudies group at the institute. "This is somewhat surprising, as it contradicts recent findings by other researchers related to more complex cooperation tasks performed by dogs and wolves." The researchers hypothesize that this could be due to the simple nature of the task in the present study, which might require only basic cooperation skills.

Food sharing depends on the dynamics of the pair, not on species

After solving the test, the pairs generally shared the food reward, but sharing was more likely when the dominant member of the pair was the second to arrive at the reward. "The probability of co-feeding during successful trials was higher when dominants 'took the risk,' so to speak, in moving first and drawing the closed door, because their higher rank gave them a higher chance to nonetheless get their share even if they accessed the food reward a few seconds after the subordinate," explains Bräuer. So while the researchers set out to test cooperation, it turned out that competition within the pair was also a factor.

Interestingly, however, dogs and wolves seemed to differ in which animal in the pair was willing to move first, drawing the closed door and thus being second to the food. Dominant wolves seemed to be more willing to take on this task in general than dominant dogs, and did so more frequently the more times the pair shared food. Dominant dogs, on the other hand, apparently seem to prefer to wait for their partner to draw the closed door. As would be expected, the more times dogs shared food, the more likely the subordinate member of the pair was to move first and draw the closed door.

The researchers point out that, although the kind of coordination shown in the present study may rely on more simple mechanisms than full, conscious cooperation, it can still inform us about how cooperative behavior might have changed - or not - during the domestication process. "Our results suggest that the abilities needed to coordinate actions were already present in the dog-wolf ancestor," notes Bräuer. "In future studies, it would be interesting to focus on the question of how exactly factors like social dynamics, living conditions, the type of task and maybe also breed differences influence the cooperative behavior of dogs and wolves."

Dogs and wolves are both good at cooperating

One of the Wolves Waiting in the Test Apparatus 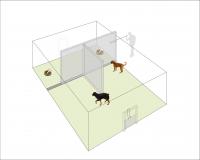