RIVERSIDE, Calif. - Certain specimens of the fossil Dickinsonia are incomplete because ancient currents lifted them from the sea floor, a team of researchers led by paleontologists at the University of California, Riverside has found. Sand then got deposited beneath the lifted portion, the researchers report, strongly suggesting that Dickinsonia was mobile, easily separated from the sea floor and not attached to the substrate on which it lived.

"Basically the fossils we studied are exceptionally well preserved, but some samples appear to be missing a part of their body," said Scott D. Evans, a graduate student in the UC Riverside Department of Earth Sciences. "We believed this to be the result of wave action. So we measured the direction of this missing part and showed that this feature was actually aligned, that is, all of the missing parts 'pointed' in the same direction. The alignment of this feature matched the alignment of other features that formed under wave action found with these fossils, indicating that it did, in fact, form from moving water currents in the ancient ocean. This idea shows us that these Dickinsonia weren't 'missing' parts of their body but instead that those parts were not preserved.

"These aren't just organisms frozen in time but show evidence of what the environment they lived in looked like and how that environment affected them," he added. "By looking at these fossils we can see that they were altered by a current that flowed over them more than 550 million years ago."

"When we look at a fossil, we aren't just looking at an animal frozen in time but an animal that has gone through many process in the more than 550 million years since it was living on the seafloor," Evans explained. "There are also questions about whether Dickinsonia was capable of movement and this research shows that it was able to be lifted off the seafloor, indicating that it wasn't attached to the bottom of the ocean. This doesn't prove that it could move but it does support the hypothesis that it was a free-living organism."

Dickinsonia are of interest to paleontologists because these animals are the first to become big and complex and the first also to form communities. Much remains unknown about what exactly they are. Scientists such as UCR's Mary L. Droser, in whose lab Evans works, have been trying to better understand these animals - how they got nutrients, how they reproduced, what interactions, if any, they had with each other and what the environment in which they lived looked like.

"These questions may seem simple to a modern biologist but these fossils are so different from the animals we see today," said Droser, a professor of paleontology. "Since we can't observe them in real life these questions become very difficult to answer. This project adds a small piece to our knowledge of these animals."

To do the research Droser and Evans spent several months over the last two summers in South Australia, where Dickinsonia fossils are abundantly found. They also spent more than two months in Australia's desert outback (in an old sheep shearing shed with beds, electricity and running water, and not much else) to study the fossils.

"We spent pretty much every available hour of sunlight looking at the fossils that occur in the Outback," Evans said. "The fossils we report on in the research paper are actually on rock beds that have been previously excavated and laid out as individual layers. These beds that are about the size of a small classroom allow us to see what the seafloor would have actually looked like. We were able to measure the angles of the missing pieces and orient them with respect to each other."

Evans is surprised that despite decades of paleontological research scientists know very little about Dickinsonia.

"I want to add to our knowledge of what they were, how they existed, and what they tell us about how the complex animals we are familiar with today evolved from very primitive organisms," he said. "I am currently working on a research paper that looks at the size distributions of different populations of Dickinsonia which will tell us a little bit about how they lived and reproduced. I then want to investigate how they grew and possibly how they moved and what material they might have been made of."

Evans and Droser were joined in the research by James G. Gehling of the South Australian Museum, University of Adelaide, Australia.

This research was funded by large grants from the National Science Foundation and NASA to Droser as well as several smaller summer research grants to Evans from the Society of Sedimentary Geology, the Paleontological Society, the Geological Society of America, the American Philosophical Society, as well as a generous joint fellowship through the National Science Foundation and the Australian Academy of Sciences, known as the East Asia and Pacific Summer Institutes program. 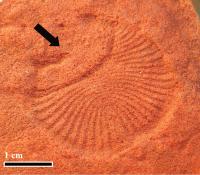