Feathers are a sleek, intricate evolutionary innovation that makes flight possible for birds, but in addition to their stiff, aerodynamic feathers used for flight, birds also keep a layer of soft, fluffy down feathers between their bodies and their outermost feathers to regulate body temperature.

Using the Smithsonian's collection of 625,000 bird specimens, Sahas Barve, a Peter Buck Fellow at the Smithsonian's National Museum of Natural History, led a new study to examine feathers across 249 species of Himalayan songbirds, finding that birds living at higher elevations have more of the fluffy down--the type of feathers humans stuff their jackets with--than birds from lower elevations. Published on Feb. 15 in the journal Ecography, the study also finds that smaller-bodied birds, which lose heat faster than larger birds, tend to have longer feathers in proportion to their body size and thus a thicker layer of insulation.

Finding such a clear pattern across so many species underscores how important feathers are to a bird's ability to adapt to its environment and suggests that adding down may be a strategy common to all songbirds, or passerines as they are known to researchers. Furthermore, finding that birds from colder environments tend to have more down may one day help researchers predict which birds are most vulnerable to climate change simply by studying their feathers.

"The Himalayas are seeing some of the fastest rates of warming on Earth," Barve said. "At the same time, climate change is driving an increase in the frequency and intensity of extremely cold events like snowstorms. Being able to accurately predict the temperatures a bird can withstand could give us a new tool to predict how certain species might respond to climate change."

The research was inspired by a tiny bird called a goldcrest during a frigid morning of field work in the Sho-kharkh forest of the Himalayas. Barve found himself wondering how this bird, which weighs about the same as a teaspoon of sugar, was able to flit about the treetops in icy air that was already numbing his fingers. Shoving his hands back into the pockets of his thick down jacket, the question that formed in Barve's mind was "Do Himalayan birds wear down jackets?"

To answer that question, Barve and his co-authors used a microscope to take photos of the chest feathers of 1,715 specimens from the Smithsonian's collections representing 249 species from the cold, high-altitude Himalayan Mountains. Then, Barve and his co-authors used those super-detailed photos to determine exactly how long each feather's downy section was relative to its total length. The team was able to do that by looking at the fluffy downy section of each feather close to its base when compared to the streamlined ends of most birds' feathers.

After meticulously logging the relative lengths of all those downy sections, Barve analyzed the results and found that the smallest birds and the birds from the highest elevations, where temperatures are at their coldest, tended to have the highest proportion of down on their body feathers. The analysis showed that high-elevation birds had up to 25% more down in their feathers, and the smallest bird had feathers that were three times as long as the largest birds, proportionately to their body size.

Past research suggested that birds from colder habitats sported added downy insulation, but Barve said this is the first study to analyze this pattern for such a large number of species in cold environments and across 15,000 feet of elevation.

"Seeing this correlation across so many species makes our findings more general and lets us say these results suggest all passerine birds may show this pattern," Barve said. "And we never would have been able to look at so many different species and get at this more general pattern of evolution without the Smithsonian's collections."

Carla Dove, who runs the museum's Feather Identification Lab and contributed to the study, said she was excited to work together with Barve to use the Smithsonian's collections in a new way. "Sahas looked at more than 1,700 specimens. Having them all in one place in downtown Washington, D.C., as opposed to having to go to the Himalayas and study these birds in the wild, obviously makes a big difference. It allowed him to gather the data he needed quickly before the COVID lockdowns swept the globe, and then work on the analysis remotely."

Barve said he is following up this study with experiments looking into just how much insulation birds get from their feathers and then will tie that to the feather's structure and proportion of down. One day, Barve aims to develop a model that will allow scientists to look at the structure of a feather and predict how much insulation it gives the bird--a capability that could help researchers identify species vulnerable to climate change.

Dove said the potential to use these results to eventually understand how some birds might cope with climate change highlights the importance of museum collections. "We have more than 620,000 bird specimens collected over the past 200 years waiting for studies like this. We don't know what our specimens will be used for down the line; that's why we have to maintain them and keep enhancing them. These specimens from the past can be used to predict the future."

Funding and support for this research were provided by the Smithsonian. 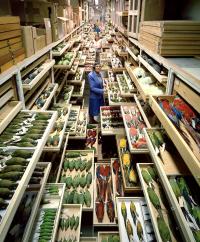 The Smithsonian's bird collection at the National Museum of Natural History in Washington, D.C.