Researchers at the Center for Vascular Research, within the Institute for Basic Science (IBS), have identified a new mechanism involved in the development and progression of glaucoma, and found a potential therapeutic option to treat it. Glaucoma is the second cause of irreversible blindness, after cataracts. It affects about 3.5% of the world population aged 40 to 80. This study, published in the Journal of Clinical Investigation, is expected to help the development of therapies to treat primary open-angle glaucoma (POAG), which counts for three quarters of all glaucoma patients.

One of the most important risk factors for glaucoma is the increased pressure inside the eye. A liquid called aqueous humor is constantly produced and drained out from the eye. It transports nutrients and inflates the eye giving it a roughly spherical shape. However, if this fluid cannot flow out of the eye chambers freely, an increase in intraocular pressure can damage the optic nerve, leading to vision loss. The precise mechanism of elevated resistance to aqueous humor outflow remains unclear, and although the current treatments for glaucoma tackle the production and outflow of aqueous humor, their outcomes are still poor.

A component of the eye that plays a fundamental role in draining out the aqueous humor is Schlemm's canal. It collects the aqueous humor and mediates its transfer from the eye chambers to blood circulation. The cells on the walls of the canal, endothelial cells, ship the liquid from the inner to the outer side in "packages", called vacuoles. As the shape and number of the vacuoles reflects the outflow performance, several giant vacuoles are expected in the normal outflow process.

The IBS team explained how imbalances in Schlemm's canal significantly increase the risk of glaucoma. They showed that an important regulator for canal functionality is the angiopoietin-Tie2 system. Angiopoietins, such as Ang1 and Ang2, are proteins important for the growth of new blood vessels and Tie2 is the receptor that binds them. It is known that the angiopoietin-Tie2 system plays a role in Schlemm's canal formation, as Tie2 mutations or angiopoietin absence result in congenital glaucoma. However, this study clarified that it is also critically important during adulthood.

The scientists also investigated if and how this process changes in older mice, as aging is a major risk factor for glaucoma, and showed that aged mice experience reduced levels of giant vacuoles, Tie2, Ang1, and Ang2, as well as other proteins connected with the angiopoietin-Tie2 pathway, like Prox1.

To test whether Tie2 activation could shift the situation, the researchers tested the antibody ABTAA (Ang2-binding and Tie2-activating antibody). They injected it in one eye of mice, while the other eye of the same mice functioned as the negative control. After one week, levels of Tie2 and Prox1, number and diameter of giant vacuoles in Schlemm's canals increased in the ABTAA-treated eyes compared to control eyes. The researchers observed a similar outcome with decreased intraocular pressure when ABTAA was injected to the eyes of mice suffering from POAG with regressed Schlemm's canals, indicating that this antibody might be considered as a therapeutic option.

"Slow development of glaucoma treatments is partly due to the poor understanding of the underlying pathogenesis," said KOH Gou Young, the corresponding author of the study. "We hope that identifying the critical role of the angiopoietin-Tie2 system in adult Schlemm's canals will bring a significant boost in the development of therapeutics."

How eyes get clogged in glaucoma and how to free them 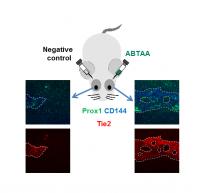