Many steep valleys in the European Alps show the relicts of large rockslides, during which several hundreds of million cubic metres of rocks get instable, collapse and impact everything on their path. "For most of these, we still do not know how they are caused, because these rockslides occurred long before the start of written history in the region about 1000 years ago," says Patrick Oswald, PhD student at the Department of Geology of the University of Innsbruck and lead author of the study. "Curiously, many of these ancient rockslides occurred together in clusters, meaning they are found in small regions and have a rather comparable age". This enigmatic pattern has puzzled researchers over the last decades and fuelled some intense debates. Some experts propose that abrupt climate shifts can degrade rock slopes towards unstable conditions, whereas others think that strong earthquake shaking is the main driver. Such problems are notoriously difficult to solve, as the object of study - the rock slope - has collapsed and cannot be investigated anymore. Therefore, the research team decided to turn the perspective around and searched underwater for answers to these questions. "The different sediment layers that are deposited year after year on the bottom of our lakes and oceans provide long-term information on climatic and ecological conditions, but also record the disturbances induced by strong earthquake shaking that happened long ago, in the prehistoric past," says Michael Strasser, head of the Sedimentary Geology working group at the Department of Geology and the Austrian Core Facility for scientific core analysis at the University of Innsbruck.

The geologists focused on two of the most massive rockslides of Tyrol, the Tschirgant and the Fernpass. "Instead of investigating the remnants of these rockslides in the landscape, we drilled into the muddy sedimentary archives on the bottom of the lakes Piburgersee and Plansee in the region and searched for specific traces that could tell us when strong earthquakes took place," explains Jasper Moernaut from the Department of Geology, head of the project this study is based on, "Tyrol on Shaky Slopes". "By comparing the earthquake and rockslide reconstructions for the past 10,000 years, we can evaluate whether these relate to each other, or not." By applying state-of-the-art techniques, such as hydroacoustic profiling of the lake's subsurface or computer-tomography scans of the 8 m long sediment cores, the researchers found two different types of earthquake traces in the sediments: Strong seismic shaking has deformed surficial sediments on the bottom of the lakes and also triggered numerous underwater mud avalanches. By radiocarbon dating of organic matter in the cores, this research discovered ten prehistorical earthquakes during the past 10,000 years. The ground shaking associated to these earthquakes was stronger than for those that have struck the region in the past ~1000 years. "Through a painstaking evaluation of historical earthquake reports and comparison with the sedimentary imprints in the lakes, we estimated the earthquake magnitudes to be M5.5 to 6.5," says Christa Hammerl, a historical seismologist at the Austrian Central Institute for Meteorology and Geodynamics. "As the earthquakes in the Eastern Alps occur at only a few kilometres depth, such earthquakes can produce considerable damage on infrastructure and the natural landscape."

Strikingly, the ages of two extraordinary strong earthquakes coincide very well with those of multiple large rockslides around 3,000 and 4,100 years ago. This age coincidence let the geologists deduce that extreme seismic shaking ultimately triggered the rockslides at these times, solving the debate on the cause of rockslide clusters in the region. Since then, no large rockslides or such extraordinary strong earthquakes struck the area. The results also indicate that a close succession of at least five severe earthquakes preceded the rock slope collapses at about 3,000 years ago. "Therefore, we propose that seismic shaking cannot only trigger rockslides, but can also gradually degrade the rock slopes towards their critical tipping point," explains Michael Strasser. "With all this new information, the challenge now lies in its implementation for better assessing future earthquake and rockslide hazards in the densely populated Alpine valleys. An adequate mitigating of such low probability but high impact events forms a big challenge. Knowledge about these past events can help better understand earthquake occurrence and provide key information for assessing future earthquake- and rockslide hazard."

Past earthquakes triggered large rockslides in the Eastern Alps 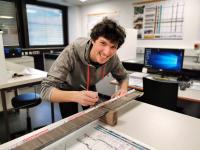