93 million years ago, bizarre, winged sharks swam in the waters of the Gulf of Mexico. This newly described fossil species, called Aquilolamna milarcae, has allowed its discoverers to erect a new family. Like manta rays, these 'eagle sharks' are characterised by extremely long and thin pectoral fins reminiscent of wings. The specimen studied was 1.65 metres long and had a span of 1.90 metres.

Aquilolamna milarcae had a caudal fin with a well-developed superior lobe, typical of most pelagic sharks, such as whale sharks and tiger sharks. Thus, its anatomical features thus give it a chimeric appearance that combines both sharks and rays.

With its large mouth and supposed very small teeth, it must have fed on plankton, according to the international research team led by Romain Vullo of the CNRS.

Scientists have identified only one category of large plankton feeders in Cretaceous seasuntil now: a group of large bony fish (pachycormidae), which is now extinct. Thanks to this discovery, they now know that a second group, the eagle sharks, was also present in the Cretaceous oceans.

The complete specimen was found in 2012 in Vallecillo (Mexico), a locality yielding remarkably preserved fossils. This site, already famous for its many fossils of ammonites, bony fish and other marine reptiles, is most useful for documenting the evolution of oceanic animals.

As well as shedding light on the structure of Cretaceous marine ecosystems, the discovery of eagle sharks reveals a new, hitherto unsuspected, facet of sharks' evolutionary history.

Discovery of a 'winged' shark in the Cretaceous seas 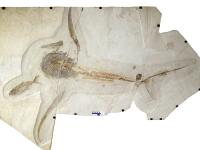 Fossil of the Aquilolamna milarcae shark found in the limestone of Vallecillo (Mexico).