New research indicates that acidification of the Southern Ocean will cause a layer of water to form below the surface that corrodes the shells of some sea snails, an outcome that could disrupt marine food webs.

University of Colorado Boulder and University of Alaska Fairbanks researchers collaborated on the study, which was published today in the journal Nature Climate Change.

Pteropods, a type of sea snail, typically live in the upper 300 meters of the water column in the Southern Ocean. Due to acidification by 2100, they may only be able to thrive on average in the top 83 meters of water. That's assuming the current level of carbon dioxide released into the atmosphere continues.

Gabriela Negrete-García, who led the study as a CU Boulder undergraduate, made the forecast based on data from a global climate model and water samples from the Southern Ocean, which surrounds Antarctica.

Pteropods rely on naturally occurring carbonate ions to build and maintain their aragonite mineral shells. As oceans absorb human-made atmospheric carbon dioxide, the water's chemistry is altered, lowering its pH and reducing the concentration of these carbonate building blocks.

The study identified the depth, known as a horizon, at which the carbonate ion concentration of sea water is inadequate to sustain aragonite shell production.

"In this study we found not just one horizon at a deep depth, but suddenly we see a second shallow horizon emerge that encroaches into pteropod habitat," said Claudine Hauri, co-author and a chemical oceanographer at UAF's International Arctic Research Center.

The present-day horizon exceeds 1,000 meters across most of the Southern Ocean, a depth that is well below pteropod habitat.

The new shallow horizon would be a layer of corrosive water beginning at an average depth of 83 meters, greatly reducing viable pteropod habitat. If that occurs, it could impact marine food webs significantly and lead to cascading changes across ocean ecosystems, including disruptions of vital global fisheries.

The individual simulations created by the model differed on when the shallow horizon will emerge. Some estimate it began as early as 2006 in discrete locations, while others predict it will begin as late as 2038. The research suggests that the change may be inevitable in large regions of the Southern Ocean, regardless of future mitigation efforts.

"If emissions were curbed tomorrow, this suddenly shallow horizon would still appear, even if possibly delayed," said Nicole Lovenduski of CU Boulder. "And that inevitability, along with the lack of time for organisms to adapt, is most concerning."

"These factors put us closer to a threshold that might be harmful for a lot of organisms," said Hauri.

There are important parallels between the cold Southern Ocean and northern seas that could indicate that Alaska's coastal waters are similarly at risk. Hauri has now developed an Alaska regional model to explore ocean acidification impacts around the state.

Additional co-authors of the study included Kristen Krumhardt of CU Boulder and Siv Lauvset of the University of Bergen in Norway. 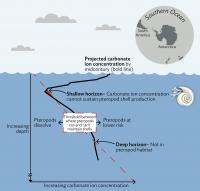