Since 2013, following strict enforcement of provincial wildlife legislation in the less studied regions of Asia, the overall trend of illegal reptile poaching is steadily decreasing. But it's too early to claim that the issue is solved. Poached reptiles are largely destined not only for the pet trade, but also folk medicines and snake charmer shows, according to the recent study led by the scientists from the Pakistan Museum of Natural History and the University of Peshawar published in the open-access journal Herpetozoa.

For the first time, the exploitation of reptiles for the pet trade has come to the attention of the public in the late 1960s. In general, illegal poaching is one of the problems we still face a lot all over the world, despite strict restrictions which are coming in force massively over the last decades. The wildlife trade leads not only to biodiversity loss (through the capture of protected species), but also threatens with a possible spread of animal-borne diseases, due to interspecies contact at pet and folk medicine markets. The case of the recent COVID-19 pandemic gives a lesson to learn, and in order to stop further occurrences, a focus on law-enforcement activities should be brought to wildlife trade hotspots.

In the particular case of Pakistan, a country with high species diversity of reptiles, still very little is known about the links between illegal wildlife trade and wildlife decline. The illegal poaching and trade in Pakistan are largely undocumented and it's difficult to bring accurate data since the trade involves many channels and follows informal networks. There is marginal information available about the medicinal use of wild flora and fauna for some parts of Pakistan, but there is no report on the commercialisation, harvest, market dynamics and conservation impact of these activities.

Since 2013, a number of confiscations of different reptile species and their parts from Pakistani nationals have been reported widely from across the country, which resulted in the enforcement of legislations regarding the wildlife trade in Pakistan.

An international team of researchers, led by Dr. Rafaqat Masroor from Pakistan Museum of Natural History investigated the extent of illegal reptile collection in southwestern Balochistan. Scientists tried to determine what impact these activities might have on the wild populations.

The field trips, conducted in 2013-2017, targeted Chagai, Nushki, Panjgur, Kharan and Washuk districts in Balochistan province. Over those years, scientists interviewed 73 illegal collectors. Most of the collectors worked in groups, consisting of males aged between 14 to 50 years.

"They were all illiterate and their sole livelihood was based on reptile poaching, trade, and street shows. These collectors were well-organized and had trapping equipment for the collection of reptiles. [...] These groups were locally known as "jogeez", who mainly originated from Sindh Province and included snake charmers, having their roots deep with the local hakeems (herbal medicine practitioners) and wildlife traders, businessmen and exporters based at Karachi city. [...] We often observed local people killing lizards and snakes, mostly for fear of venom and part for fun and centuries-old myths", share Dr. Masroor.

A total number of illegally poached reptiles, recorded during the investigation, results in 5,369 specimens representing 19 species. All of them had already been declared Protected under Schedule-III of the Balochistan Provincial Wildlife Act.

Amongst the reasons for the province of Balochistan to remain unexplored might have been the lack of government environmental and wildlife protection agencies, lack of resources and specialists of high qualification in the provincial wildlife, forest and environment departments, as well as geopolitical position and remoteness of vast tracts of areas.

Scientists call for the provincial and federal government to take action and elaborate a specific strategy for the conservation of endemic and threatened species as a part of the country's natural heritage both in southwestern Balochistan and whole Pakistan. The conservation plan needs to be consulted with specialists in the respective fields, in order to avoid incompetence.

Also, the research group suggests to strictly ban illegal poaching of venomous snakes for the purpose of venom extraction.

What is important to remember is that Balochistan represents one of the most important areas of Asia with a high number of endemic reptile species. The illegal capture of these species presents a threat to the poorly documented animals. Even though the current trend for captured reptiles is decreasing, more actions are needed, in order to ensure the safety of the biodiversity of the region. 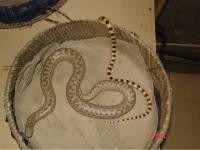 A View of Live Reptiles

Number of Specimens Collected against the Number of Individuals (Illegal Collectors)