Troy, N.Y. – A "revolution" in the way we illuminate our world is imminent, according to a paper published this week by two professors at Rensselaer Polytechnic Institute.

Innovations in photonics and solid state lighting will lead to trillions of dollars in cost savings, along with a massive reduction in the amount of energy required to light homes and businesses around the globe, the researchers forecast.

A new generation of lighting devices based on light-emitting diodes (LEDs) will supplant the common light bulb in coming years, the paper suggests. In addition to the environmental and cost benefits of LEDs, the technology is expected to enable a wide range of advances in areas as diverse as healthcare, transportation systems, digital displays, and computer networking.

"What the transistor meant to the development of electronics, the LED means to the field of photonics. This core device has the potential to revolutionize how we use light," wrote co-authors E. Fred Schubert and Jong Kyu Kim.

Schubert is the Wellfleet Senior Constellation Professor of Future Chips at Rensselaer, and heads the university's National Science Foundation-funded Smart Lighting Center. Kim is a research assistant professor of electrical, computer, and systems engineering. The paper, titled "Transcending the replacement paradigm of solid-state lighting," will be published in the Dec. 22, 2008 issue of Optics Express.

Researchers are able to control every aspect of light generated by LEDs, allowing the light sources to be tweaked and optimized for nearly any situation, Schubert and Kim said. In general LEDs will require 20 times less power than today's conventional light bulbs, and five times less power than "green" compact fluorescent bulbs.

If all of the world's light bulbs were replaced with LEDs for a period of 10 years, Schubert and Kim estimate the following benefits would be realized:

With all of the promise and potential of LEDs, Schubert and Kim said it is important not to pigeonhole or dismiss smart lighting technology as a mere replacement for conventional light bulbs. The paper is a call to arms for scientists and engineers, and stresses that advances in photonics will position solid state lighting as a catalyst for unexpected, currently unimaginable technological advances.

"Deployed on a large scale, LEDs have the potential to tremendously reduce pollution, save energy, save financial resources, and add new and unprecedented functionalities to photonic devices. These factors make photonics what could be termed a benevolent tsunami, an irresistible wave, a solution to many global challenges currently faced by humanity and will be facing even more in the years to come," the researchers wrote. "Transcending the replacement paradigm will open up a new chapter in photonics: Smart lighting sources that are controllable, tunable, intelligent, and communicative."

In October, Rensselaer announced its new Smart Lighting Research Center, in partnership with Boston University and the University of New Mexico, and funded by an $18.5 million, five-year award from the NSF Generation Three Engineering Research Center Program. The three primary research thrusts of the center are developing novel materials, device technology, and systems applications to further the understanding and proliferation of smart lighting technologies.

For more information on the Smart Lighting Center, visit: smartlighting.rpi.edu. 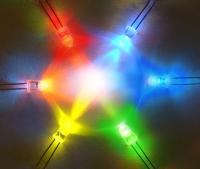