The open-access journal PhytoKeys – known for applying cutting edge technologies in publishing and dissemination to accelerate biodiversity research – is pioneering an electronic-only publishing workflow in a series of papers published over the course of the first week of January 2012 (see related press release).

As of the 1st of January 2012, extensive new changes took effect to the way plant scientists name new plants, algae, and fungi. Traditionally, the publication of new plant names, which is governed by the International Code of Botanical Nomenclature (ICBN), has never allowed publication of new names in anything other than print on paper. "Without such codes governing naming, there would be chaos, potentially impacting all branches of life sciences as the name of a species - be it a pathogen or a crop - represents a fundamental part of communicating knowledge about the natural world." said Dr. Sandra Knapp from the Natural History Museum London, Deputy Editor-in-Chief of PhytoKeys and author of the first electronic-only description of a new species, Solanum umtuma (a relative of tomatoes and many other important plant species), published on 1st of January 2012 .

Lead authors, ex-pat New Zealander Dr. Matt von Konrat, based at the Field Museum in Chicago, and Dr. Peter De Lange, a plant scientist of the Department of Conservation, described – also in PhytoKeys – a new liverwort species from New Zealand under the revolutionary new rules that allow electronic publication.

"The electronic publishing of new names will not only facilitate the work of taxonomists and publishers", said Dr. W. John Kress from the Smithsonian Institution, Editor-in-Chief of the open access journal PhytoKeys, "but this innovation will accelerate the whole process of scientific discovery and description of new plants. As natural habitats are degraded at an ever faster rate, it is crucial that botanists speed up their work on finding and describing new species of plants before they are threatened with extinction"! "This is particularly pertinent to biodiversity hotspots, such as New Zealand", added both von Konrat and de Lange.

"Scientific papers published in PhytoKeys are freely downloadable for anyone to read and use, which is particularly significant in smaller countries like New Zealand, where many individual researchers and smaller institutions would not otherwise have access to many scientific serials", commented Prof. Lyubomir Penev, Founder and Managing Editor of PhytoKeys.

The newly described species is from a group of plants commonly referred to as liverworts. "This group of generally small-sized plants forms an incredibly conspicuous and significant component in New Zealand ecosystems. Based on our present knowledge, New Zealand may have almost 10% of the world's species of liverworts - a little-known but widespread group of plants - which are related to those that first colonized land millions of years ago. That is an astonishing figure", said Dr. von Konrat.

New Zealand has a high proportion of endemic plant species that are not found anywhere else in the world. Some of these are like the Tuatara's of the plant world, and are very significant towards our understanding of early land plant evolution. On the other hand, "the new species underscores how this enigmatic group of plants has been largely overlooked compared to seed plants and our fauna, especially on many of our offshore islands which harbour significant biodiversity" commented Dr. Peter de Lange. '

Liverworts are being increasingly recognized by everyday New Zealand people and world-wide as beautiful and important contributions to global biodiversity, as important environmental indicators and as potential indicators of global warming. Indeed, in 2011, two liverworts – the highly threatened Frullania wairua (itself known only from a seriously threatened tree, Bartlett's Rata) and Lejeunea hawaikiana – received a top 10 listing in the annual New Zealand Plant Conservation Network " vote for your favourite plant" competition.

The new liverwort species, named Frullania knightbridgei, is particularly noteworthy because it involved national and international participants from universities, museums, and government departments", said von Konrat, "and was named after a prominent New Zealand conservationist, Phil Knightbridge, who earlier this year passed away." "The continued collaborative efforts between agencies such as the Department of Conservation and international research institutes such as The Field Museum and our partners, which currently have the resources to undertake expensive DNA analysis, will help uncover more of the as yet hidden biodiversity of this group of plants. The new species was first discovered in Rakiura/Stewart Island, an area of high rainfall, which is particularly significant as this group of plants, together with mosses, are able to soak up water like a sponge and critical in preventing deleterious effects of high rainfall," said von Konrat. 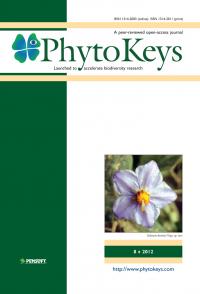