Most high school students can recite the central dogma of molecular biology: DNA makes RNA makes protein. We all know it. But have we ever seen it?

Parts of it, yes. DNA transcription, the first step in gene expression, has been quantified in real time. But the second step ­- the translation of genetic code into a protein - is much harder to see in living systems, and until now has eluded us.

In an unprecedented feat, Colorado State University biochemists have made a live-cell movie of RNA translation -- the fundamental cellular process by which a ribosome decodes a protein.

Sixty years after Francis Crick first described it, CSU scientists have illuminated, in a single living cell, this final step of gene expression. Their tools: some clever protein engineering, and a custom-built microscope that can show single-RNA translation with nanoscale precision.

The breakthrough was led by Tim Stasevich, assistant professor in the College of Natural Sciences' Department of Biochemistry and Molecular Biology, and published in the journal Science May 5, 2016. The paper's first author is research associate Tatsuya Morisaki, who built the microscope and performed the experiments.

Their work was published alongside a paper by Robert Singer of Albert Einstein College of Medicine, who describes a similar feat achieved by different means. The journal chose to highlight these complementary discoveries at once.

"No one has ever been able to image a protein being born," Stasevich said. "This is a critical step in turning genes on and off, and gene regulation at the level of translation is associated with many diseases. This is a big deal, because by not being able to image that event, we haven't been able to gain insight into what's going wrong. People have done it in vitro, but not in a living cell."

Proteins perform most cellular functions and are the reason we're alive, and RNA makes protein. But why was it so hard to see it happen? Because proteins take time to mature and fold, and state-of-the-art techniques that can illuminate proteins are too slow to capture the earliest stage of a protein's life. Even tagging RNA with a green fluorescent protein, whose discovery won a Nobel Prize in 2008, takes too long. "By the time the light turns on, translation is long over," Stasevich explained.

To get around this problem, the researchers encoded proteins with receptor sites, which act like a lock to a key. They made their experimental living cell express a simple, fluorescent antibody fragment -- the key to the lock. As soon as translation occurs in the cell, the key fits into the lock, and the protein goes bright green. A nascent protein is still attached to its RNA messenger, and the researchers can see and record all of it happening. By using different biochemical tags, they can image RNA translation of a variety of proteins, each identifiable by a different color.

This tagging process was one thing, but how to capture it was another. The CSU researchers used their custom-built microscope, which they affectionately call a Fixie after a single-speed bicycle. With no moving parts and two highly sensitive cameras, their system can image RNA and proteins in two colors simultaneously. Their microscope is based on a similar design by co-author Brian English of Howard Hughes Medical Institute.

Through their experiments, the researchers shared other insights, including that elongation of proteins in living cells through translation occurs at a rate of 10 amino acids per second. They also showed that polysomes, which are strings of ribosomes, are globular in shape rather than elongated. Lastly, they found that polysomes sometimes interact with each other, even when they are encoding completely separate proteins.

The ability to image RNA translation could provide new depth to the fundamental understanding of genetic machinery, which touches everything from disease mechanics to why some proteins have an easier time folding and unfolding. For instance, viruses are too small to have their own translation machinery, and translation has been described as the battleground between virus and host. "Imaging how a virus hijacks our translation machinery is going to be interesting," Stasevich said.

Furthermore, diseases like cancer almost always involve more than one gene, and those genes often talk to each other. The researchers hope they can look more deeply at gene networks to understand how they work together and, ultimately, how to keep them from malfunctioning. 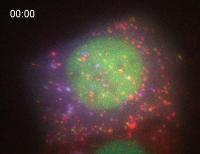