The insecticide clothianidin affects different species of bees in different ways. While it has no demonstrably negative effect on honeybees, it disrupts the growth of bumblebees and threatens the survival of entire colonies. However, the insecticide does not make either species more susceptible to diseases and pathogens, as a massive field study in Sweden shows. The latest findings were published in the renowned journal "Nature Communications".

The insecticide clothianidin affects different species of bees in different ways. While it has no demonstrably negative effect on honeybees, it disrupts the growth of bumble bees and threatens the survival of entire colonies. However, the insecticide does not make either species more susceptible to diseases and pathogens, as a massive field study in Sweden shows. The international team, including scientists from Martin Luther University Halle-Wittenberg (MLU) and the Swedish University of Agricultural Sciences, reports its latest findings in the renowned journal "Nature Communications".

Data for the study have been taken from a unique research project in southern Sweden. In 2013, 96 honeybee colonies were placed in oilseed rape fields where the seeds of the plants had previously been either treated or not treated with clothianidin. The researchers closely observed how the colonies developed, looked for typical pathogens, and analysed the pollen collected by the honeybees. One year later, the experiment was repeated with a subset of the honeybee colonies of the first year. "Most of the previous studies examining the negative effects of neonicotinoids on bees were conducted in the laboratory. The aim of this project was to clarify whether the lab results could be confirmed in the field," explains Julia Osterman, the first author of the study who is doing her PhD at the Institute of Biology at MLU and the Helmholtz Centre for Environmental Research (UFZ). The large-scale project was led by Dr Maj Rundlöf from the University of Lund in Sweden.

In 2015, the research team caused a sensation when its first paper was published in the journal "Nature". The paper described how the insecticide negatively impacted wild bees. In the new study, the team has augmented its previous findings with new details. One focus of the new study and a parallel - though only one-year-long - study on bumblebees was to find out whether pesticides make bees more susceptible to disease. The researchers found no evidence of this. Instead, the colonies near treated sites acquired fewer pathogens over time even though the pollen they collected contained considerable amounts of clothianidin, while pollen collected from control colonies were practically free of the neonicotinoid.

The size of the honeybee colonies also remained constant. "Because they are so large, honeybee colonies can compensate for negative effects on individual bees much better than solitary bees or bumble bees," says Osterman. But the situation was different for bumble bees: If they were placed near fields treated with clothianidin, their offspring were not only much smaller, the colonies produced considerably fewer queens and male drones. "Since only newborn bumblebee queens survive the winter, the negative influence on their numbers is particularly worrying," explains Dimitry Wintermantel from the French Institute of Agricultural Sciences INRA, who also played an instrumental role in the new study.

The new results not only confirm the analyses of the original field study. According to the researchers, they also demonstrate to researchers how important wild bee trials are in the approval process for pesticides. At the same time, the study suggests that it can be difficult to transfer results from lab tests to real conditions in the field. Both could mean that the risk assessment for pesticides might need to be changed. In 2018, the European Union banned the outdoor use of three out of five neonicotinoids, including clothianidin, due to their harmful effects on bees. This has meant farmers now have to resort to alternative pesticides. "However, it is still unclear what impact they have on bees and how the cultivation of mass crops, such as rapeseed, is changing in Europe as a result of the ban," Osterman concludes.

Field trial with neonicotinoids: Honeybees are much more robust than bumblebees 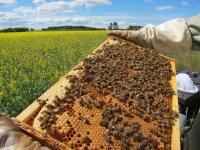 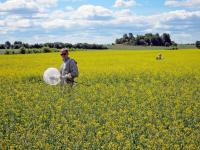