Specially-adapted drones developed by an international team have been gathering data from never-before-explored volcanoes that will enable local communities to better forecast future eruptions.

The cutting-edge research at Manam volcano in Papua New Guinea is also improving scientists' understanding of how volcanoes contribute to the global carbon cycle, key to sustaining life on Earth.

The ABOVE project was an international endeavour, bringing together leading experts from Bristol with others across the world, all with previous hands-on experience of using aerial robotics to study volcanic emissions.

Volcanic emissions are a critical stage of the Earth's carbon cycle - the movement of carbon between land, atmosphere, and ocean - but CO2 measurements have so far been limited to a relatively small number of the world's estimated 500 degassing volcanoes. Measurements need to be collected very close to active vents and, at hazardous volcanoes like Manam, drones are the only way to obtain samples safely.

The team's findings, published in Science Advances, show for the first time how it is possible to combine measurements from the air, earth, and space to learn more about the most inaccessible, highly active volcanoes on the planet.

By adding miniaturised gas sensors, spectrometers and direct sampling devices, the team was able to fly the drone 2km high and 6km away to reach Manam's summit, where they captured gas samples to be analysed within hours.

Calculating the ratio between sulphur and carbon dioxide levels in a volcano's emissions is critical to determining how likely an eruption is to take place, as it helps volcanologists establish the source of its magma.

Dr Kieran Wood, from the Bristol's Department of Aerospace Engineering, worked closely with Dr Liu, to plan and organise the expedition. The trip in May 2019 was Dr Wood's third to PNG, where he was involved in co-ordinating logistics, building cooperation with the other teams, and providing training for staff at the Rabaul Volcanological Observatory.

"The ABOVE campaign was the successful culmination of several years of development and planning. This was a rare and exciting opportunity to have so many leading researchers from around the globe, all with previous field-work experience, focused on the same goals. It was very important that we were as ready as possible for this one, hence we had refined the technology over several prior expeditions," said Dr Wood, who served as technical expert and pilot for the Bristol team.

As well as being co-author of this study, Dr Wood is lead author of a complimentary paper: BVLOS UAS Operations in Highly-Turbulent Volcanic Plumes, published this week in Frontiers in Robotics & AI, which focuses on the flight mechanics and the drone used by the Bristol team.

Dr Matthew Watson, a volcanologist from Bristol's School of Earth Sciences added: "This was a really great project with a number of key outcomes. We learnt a lot about little studied volcanic systems using a suite of state-of-the-art measuring systems"

"Unoccupied Aerial Vehicles (UAVs) are changing the way volcanologists gather data. They facilitate safer, closer and more consistent measurement and are becoming a key part of the suite of instruments scientists use to monitor volcanoes." 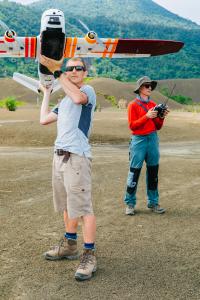